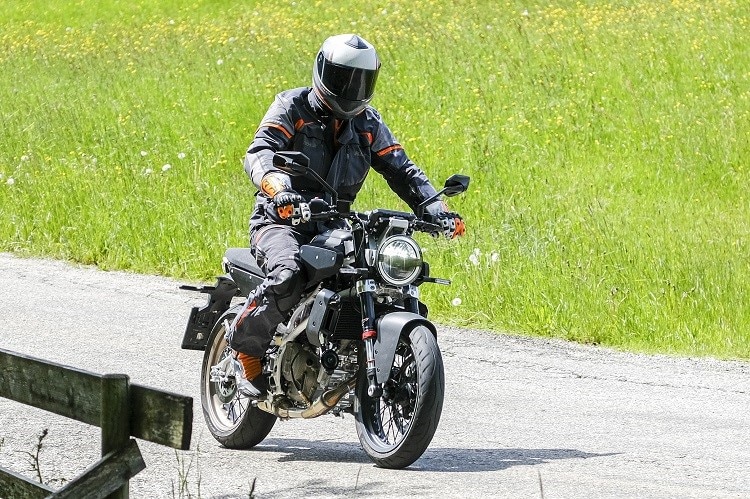 2022 Vitpilen 401 spy pics suggest that it won’t just be a minor nip and tuck but instead, Husqvarna is going the whole hog for the next-gen model…

Along with the next-generation 390 Duke, KTM and Husqvarna are also testing out the models based on it – the 401s. After yesterday’s show of the new, radically different 401 Svartpilen, we now have pics of the 2022 Vitpilen 401 as well.

In fact, there are two clarifications we have to make – one, that the model that we talked about yesterday could also be a crossover on this 401 platform and two, these spy pics of Vitpilen 401 came up before – just that we got hold of them now.

Coming to the spy pics, the cafe racer gets big changes to the styling as well as mechanicals. The tank now gets an extended scoop, the front fenders are chunkier and in fact, against the rounder profile of the current version, Husqvarna has opted for a slightly edgier design.

Moving to the motor, it gets what is purported to be the all-new near 400cc engine that this platform will get – whenever it arrives. Obviously, there is nothing known about the specs but for sure, it will be an evolution over the existing, supremely powerful motor.

Aside that there is a new frame apart from that chunkier swingarm – that has also been seen on other spied models. For some reason, the seating posture of this new Vitpilen is relatively relaxed when compared with the current model – with what look like slightly forward biased footpegs and raised handlebar.

Apart from that the round console is also not to be seen. In place appears to be a rectangular cluster which should be all-digital.

All in all quite a comprehensive update is on the cards and we expect it to come to India only next year, after its unveil that may happen sometime later this year.