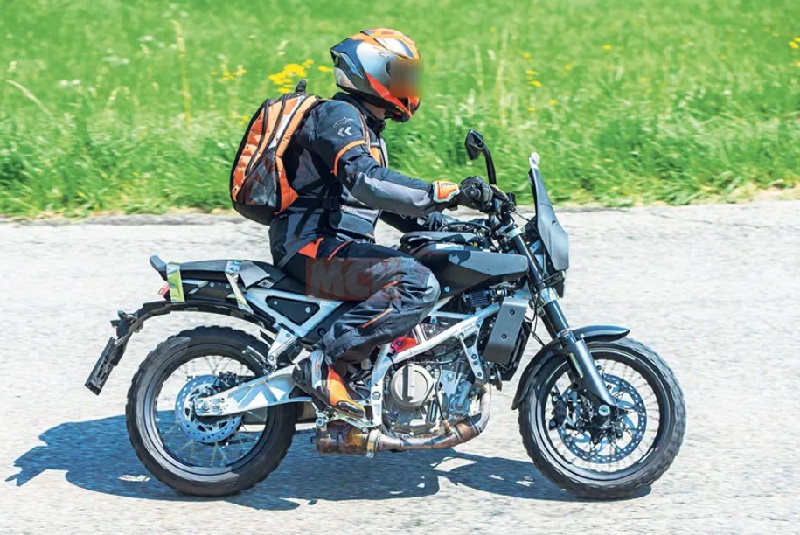 The Swedish brand that is now owned by KTM – Husqvarna restarted its journey with the Svartpilen and Vitpilen brands. Both the motorcycles are based on equivalent KTM models.

While the Vitpilen is specific, the Svartpilen is more versatile, and though we do not have relative sales numbers, we believe it is the latter that is a more accepted model of the two. But one thing is for sure – that there is not a very significant demarcation between the designs of both the models.

And that is what Husky may have thought of plugging. In a latest update, a Svartpilen (purported 401) test mule has been spotted testing with almost a complete overhaul.

This Svartpilen 401 carries a windscreen, that currently, looks hideous (but with all the kit it may gel well with the design). We can also notice sharp tank extensions which give the motorcycle an almost semi-faired look.

There is a new Steel Trellis frame which is now exposed, like Dukes. The motor itself appears to be all new and is similar to the one seen on one of the earlier test mule of next-gen 390 Duke.

Then there is a new aluminum swingarm that, again, looks similar to an older 390 Duke test mule. There may be a completely new digital instrument cluster behind that visor which is expected to get Bluetooth connectivity.

There are many other changes that we can notice and in short, Husqvarna is changing the model exhaustively. As MCN, the original source of these spy pics also suggests, that this is more of a 2022 model, looking at the (lack of) finesse of the test mule.