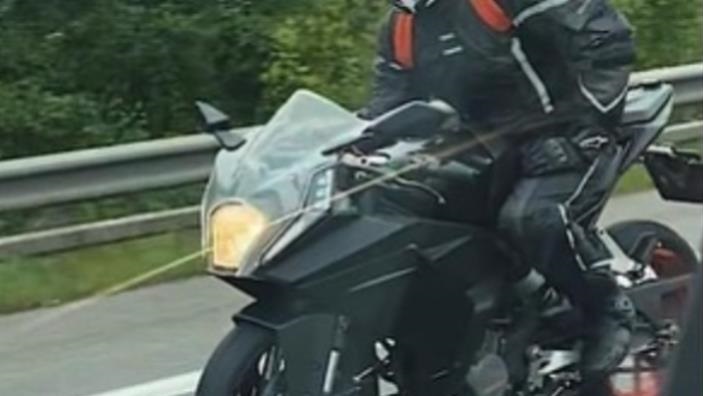 2021 RC200 spy pics have surfaced for the first time. The new-gen RC may be unveiled in the coming few months within this year…

We know KTM is testing its next-generation RC and the frequency of spy pics have increased, suggesting that the company may be nearing the freezing date. Till now, it was the new RC390 that was spotted, however, in a latest, its lesser sibling – the RC200 has also been snapped.

The 2021 RC200 continues with the same new styling concept – which is less-hooligan and more mature. Before we move onto more details, let us clarify why this is the 200…

Headlamp – This mule is running on halogen headlamps. There is no way in the world that the flagship (390) will get them. The current 2020 200 Duke is also equipped with halogen bulb whereas the 390 gets LEDs.

Exhaust – In place of the side slung exhaust canister of the bigger models, this motorcycle is running with an underbelly – very similar to the 200 Duke’s set-up.

Engine Casing – If you look closely, this motorcycle’s engine casing (more specifically the engine oil cap) is positioned at the same place as the 200 Duke. This cap is at a slightly different position on the 250 and the 390 Dukes/RCs.

These pointers, specifically the last one, is almost a confirmation that this is the RC200 on tests. And if it is so, this is the first time the new-gen 200 has been spotted.

One of the spy pic gives us a sneak of the new instrument cluster which looks like it is a colored TFT screen similar to the 390 Duke. It must be noted that none of the RCs – including the RC390, gets the smartphone connectivity enabled colored display yet. This spotting appears to suggest that the new-gen models will finally come equipped with it.

Chances are that the 2021 RC is close to getting unveiled – most probably sometime this year itself. And its launch can be expected sometime next year.