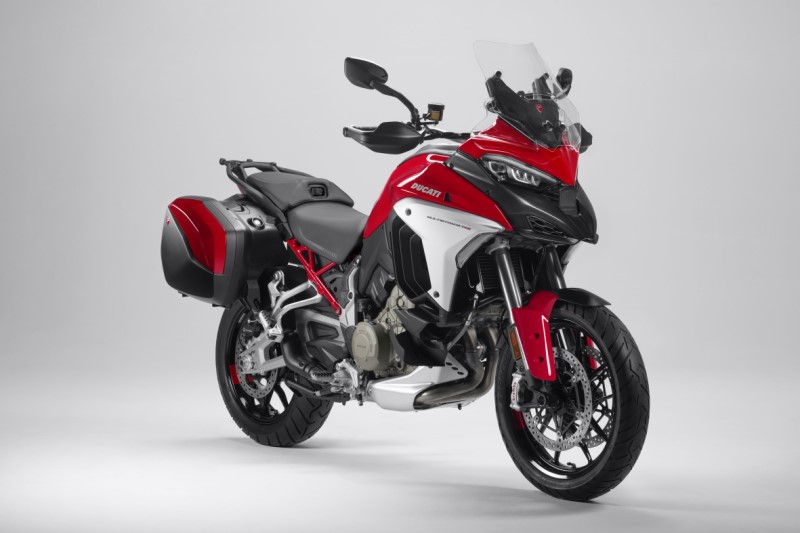 2021 Ducati Multistrada V4 is the first motorcycle to get adaptive cruise control, and will be available in three variants, namely V4, V4 S, and V4 S Sport.

The Italian automaker, Ducati has unveiled the Multistrada V4, which is an addition to its existing ADV line-up comprising of Multistrada 950 and Multistrada 1260. The motorcycle was unveiled at the Ducati World Premiere Event recently.

The bike gets an aggressive styling and is powered by the signature ‘beak’ design, along with twin LED headlamp cluster and LED DRLs. It has an adjustable windscreen, and a muscular fuel tank with 22-liter capacity.

In terms of features, it becomes the world’s first bike with front and rear radars. While the front radar controls the adaptive cruise control, the rear radar detects and reports the vehicles in the blind spot. It also gets Ducati traction control, Ducati Wheeling Control, and an Inertial Measurement Unit (IMU) which manages the operations of the cornering ABS.

Talking about the mechanicals of the bike, the new Multistrada V4 comes with a lightweight (66.7 kg), 1,158 cc engine that delivers a peak power of 170 hp at 10,500 rpm, coupled with 125 Nm of torque at 8,750 rpm. The company is boasting of the maintenance intervals of the bike, which happen to be 15,000 km for oil change, and valve clearance check and eventual adjustment required at every 60,000 km.

The bike is available in three variants, namely V4, V4 S, and V4 S Sport. The 2021 Ducati Multistrada V4 will go on sale by the end of this month in a few markets, but its Indian launch is expected to happen only by early next year.