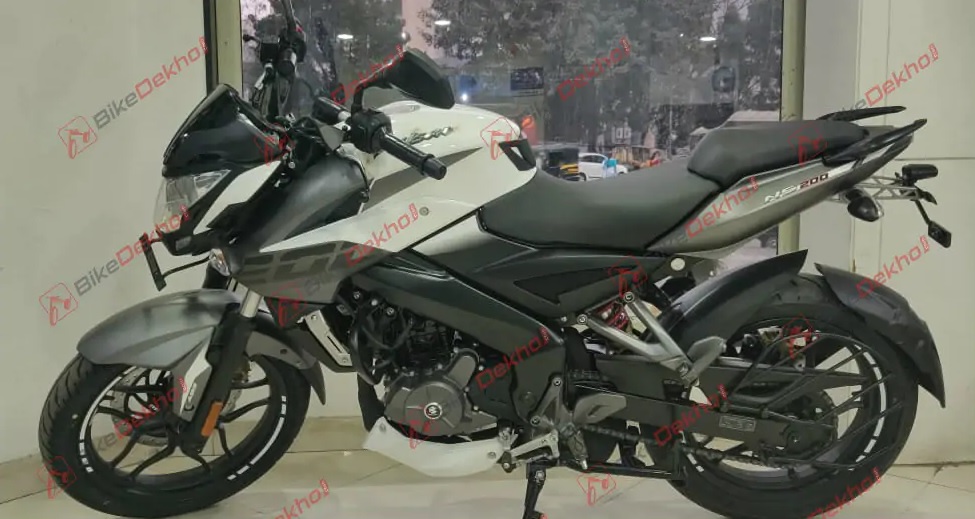 Pulsar NS200 BS6 launch expected very soon now that it has started reaching dealerships. It doesn’t get any changes in this upgrade…

Though late but Bajaj Auto has started its Bharat Stage 6 journey with the official launch of CT and Platina range (details and price here). It has also been caught testing a new smaller Dominar as well as Pulsar 220 on the roads.

In a latest, the Pulsar NS200 BS6 has been spotted surprisingly at some dealership in India. There are two giveaways that this is the updated model – there is no fuel knob near that seat (which is present on the current carburetted Pulsar NS200 BS4) and the modified exhaust which suggests changes to the catalytic converter, etc.

This spotting confirms that the new Pulsar NS200 will become fuel injected. Other than that there appears to be no changes to the model. The report mentions that there isn’t even a new colour on offer. It carries forward the similar colour theme as well on this white display model.

It must be known that Bajaj was already making fuel injected Pulsar NS200 for some of its export markets; it produces a slightly higher power output of 24.5 PS along with 18.6 Nm of max torque. However, due to the BS6 compliance, the India-spec model may lose a few digits from these figures. In comparison, the carburetor equipped Pulsar NS200 was good for 23.5 PS at 9500 rpm and 18.3 Nm at 8000 rpm.

Dominar 250 – Four Pointers That Suggest it is NEXT

The report claims that despite no other changes or feature additions, this Pulsar has seen a price hike of roughly Rs 11,000 (now Rs 1.24 Lakh ex-showroom in Mumbai). Currently, Pulsar NS200 BS4 retails for Rs 113,331 ex-showroom Mumbai and Rs 114,355 ex-showroom Delhi. Since the motorcycle has already started reaching dealerships, expect a formal launch in the coming few days, which is when we will also get to know about its exact price and any other changes, if any.