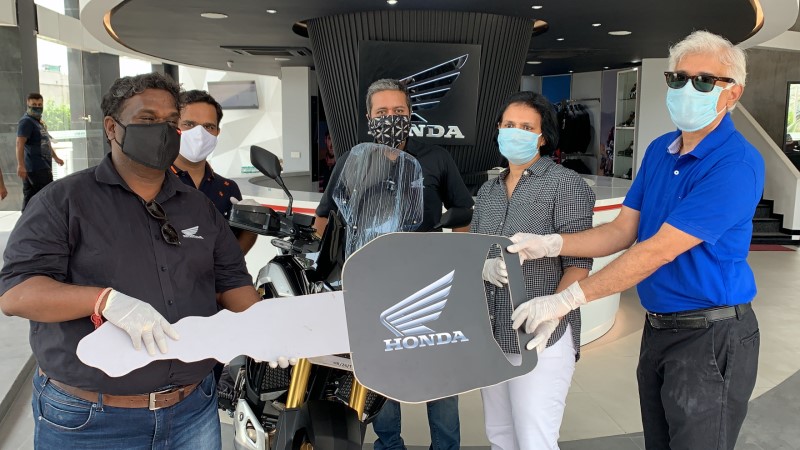 2020 Africa Twin deliveries have commenced in India. It is the first 1000cc “Make In India” model. The first bike was delivered yesterday from Honda BigWing.

Honda has finally commenced deliveries of its 1100 cc adventure sports bike – the Africa Twin from yesterday. The new updated version of the motorcycle comes with many new features as compared to its predecessor.

The motorcycle, which also happens to be the first BS6 compliant “big-bike” from Honda, was launched in March by Ricky Brabec (he is a reigning 2020 Dakar Rally World Champion from Monster Energy Honda Team).

The 2020 Africa Twin comes with a bigger 1100 cc engine powered by a six-axis IMU and weighs 5 kg lesser than its predecessor, thanks to the new lightweight chassis, new suspension, and electronics. Also, the bike is smaller and slimmer in size.

In terms of features, the Africa Twin gets a 6.5-inch MID TFT touch screen with support for Apple CarPlay. Apart from that, the bike features cruise control via Throttle By Wire (TBW), wheelie control, rear-lift control, and 3-stage cornering lights.

In terms of specifications, Honda claims that the bike with the new engine delivers 12% more peak power and 11% higher torque. Also, the ADV boasts of a 10% higher power-to-weight ratio.

The new Africa Twin is offered in two variants – Manual Transmission (MT), and Dual Clutch Transmission (DCT), which are priced at ₹15,35,000 and ₹16,10,000 (ex-showroom price), respectively. The MT variant is for sale for the first time in India.