2019 Dominar launch should be soon based on the hints given by Bajaj. It is getting some interesting changes…

A new spy video of the 2019 Dominar has surfaced on the internet featuring a Duke 390 rider chasing the upcoming motorcycle in full camouflage, possibly somewhere in or near Pune. The spotter (credit Creative bastard41) says that the test motorcycle was fast.

It has already been confirmed that 2019 Dominar will come with Upside Down Forks which, to us, looks more of an aesthetic add-on instead of a very functional one (vis-a-vis the cost increment it will bring in). Apart from this, that double barrel exhaust is clearly visible in all the spottings. There are other changes in the upcoming model, details of which you can read here (it also has a walkaround video of the upcoming model). 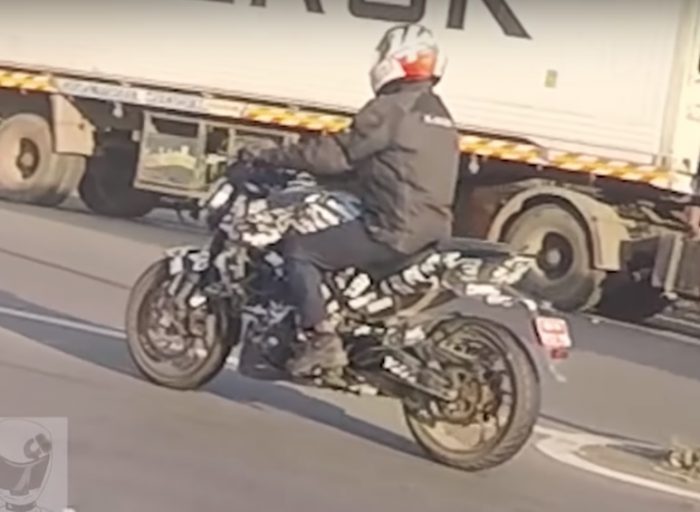 Rajiv Bajaj has already announced that they will be marketing new Dominars soon which means the 2019 Dominar may be launched very soon..probably within a few weeks or months from now. Now that they are aggressively testing it on the open, it will be interesting to see if Bajaj adds a wee bit of more juice to the already torquey motor apart from all the changes that are visible.

To me it appears Bajaj has understood that though Dominar makes for a shocking pricing value for money preposition, enthusiasts are not buying it solely for that one reason. And that the motorcycle can be an equivalent seller or could do even better if they can equip it with more ‘glamorous‘ features even if it comes at a significant price increment.

So, the question is – will you buy an even more feature rich Dominar 400 at over 2 Lakh?