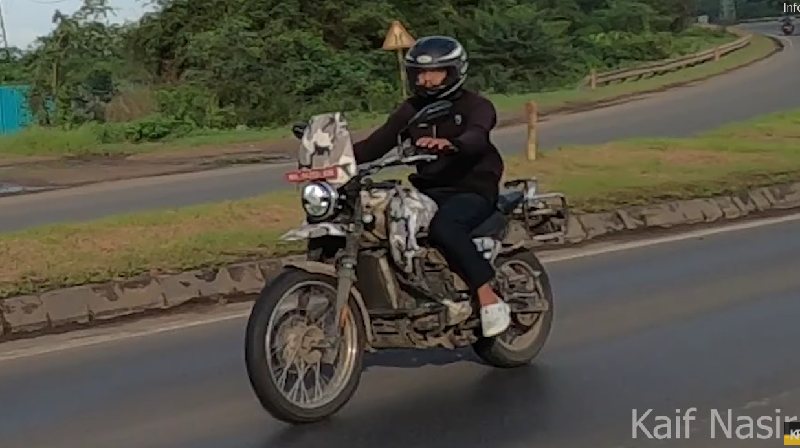 Yezdi ADV launch is expected along with the scrambler around Diwali. But will the production models differ in design? Shouldn’t they..?

Recently, a Chinese company Hanway introduced G30 – a motorcycle that is a replica of Royal Enfield Himalayan. There is nothing surprising as Chinese have been known for copying international designs.

Now, Indian manufacturer Classic Legends, that also operates in retro classic motorcycle segment, is caught testing an ADV. This is a leaf out of Royal Enfield’s books. There is no problem with that.

However, the spotted test mule looks so similar that it could be mistaken as a Himalayan itself! It has a round headlamp, front beak, visor, raised handlebars, similar style fuel tank and the overall design.

This ADV is expected to be launched under the Yezdi banner and we just hope the final production motorcycles look different from these test mules.

Power is speculated to come from the bigger version of the Jawa’s motor – the 334cc, single that currently does duty on the Perak. On the bobber it churns 30.64 PS of power and 32.74 Nm of torque. Both these numbers are higher than Himalayan’s figures but Himalayan has a slightly bigger 410cc long stroke engine.

Apart from the Yezdi ADV, sibling scrambler has also been spotted. The scrambler may resurrect the once-popular Roadking moniker. An interesting bit to note is that the roadster scrambler has a weird seat with a big incline for the pillion (or is it the angle/disturbance in the pic?).

The exhaust notes of both the bikes have also been captured in the video and though they are not closer to the Himalayan, they are fairly similar to the Jawas that are on the roads.

Expect Classic Legends to revive the Yezdi moniker with these motorcycles and launches are expected in the weeks to come, probably ahead of Diwali.