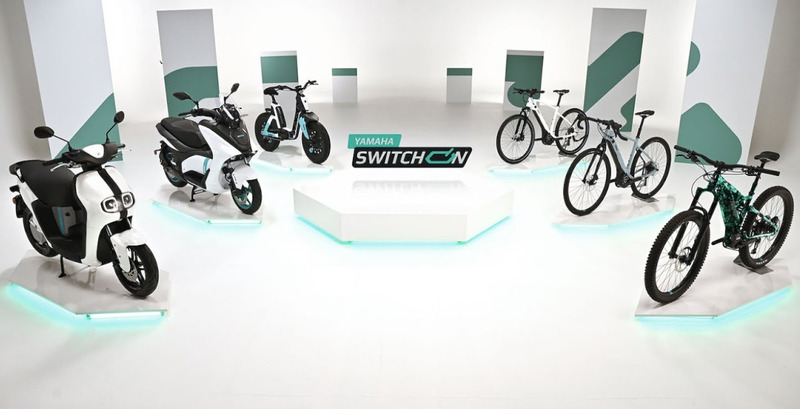 Yamaha is the latest of the big name manufacturers to start their journey in the EV world. And boy!! have they taken their sweet time to get here.

It was back in 2018 when we first got the evidence of Yamaha’s intention to step into the EV segment when they announced their partnership with Taiwan based swappable battery experts – Gogoro. Now, in the first week of March, Yamaha have globally unveiled their new line-up of electric two-wheelers consisting of Electric Scooter and Electric Bicycles.

Their first step into the EV domain is marked by adoption of a new colour scheme – Aqua – moving away from their signature Blue colour. The company explains that the new ‘Aqua’ colour is a combination of the company’s signature Blue colour and of the Green colour representing the clean source of propulsion.

Yamaha have pulled the covers off from their long awaited e-scooter based on their E02 concept which was showcased in the 2019 Tokyo Motor Show. The new electric scooter is called “Neo’s” and the company states that it will produce 50cc-equivalent power. The Neo’s scooter follows the conventional step-through design and features the novel removable and swappable battery which definitely is a result of their partnership with Gogoro.

The other concept they showcased is their popular E01 concept which has been in recent news as well. This electric scooter is designed to resemble the TMAX and NMAX IC powered cousins but features various futuristic design elements. The E01 concept has been designed to provide the practicality and versatility of a 125cc-equivalent scooter to the masses.

According to Mr. Eric de Seynes (President and CEO, Yamaha Motor Europe), their plan for E01 is to put the electric scooter on a ridesharing trial in cities of Europe in order to understand the sentiments and requirements of the consumer. He didn’t mention when this trial run will occur but it is expected that it will happen sometime in the second half of 2022.

Moving away from concept electric scooter, Yamaha further moved on to unveil their B01 concept which we can only describe as an E-Moped. This e-moped is very similar to the Fantic Issimo from Fantic, with whom Yamaha have been in partnership since 2020. The B01 e-moped has a very unique bicycle-esque design with wide cross-spoked wheels. It is very different from the moped design we are accustomed to since our childhood.

Other than the these, Yamaha also unveiled three electric bicycles – one having standard design, one having racing bicycle design and last one having off-road design.