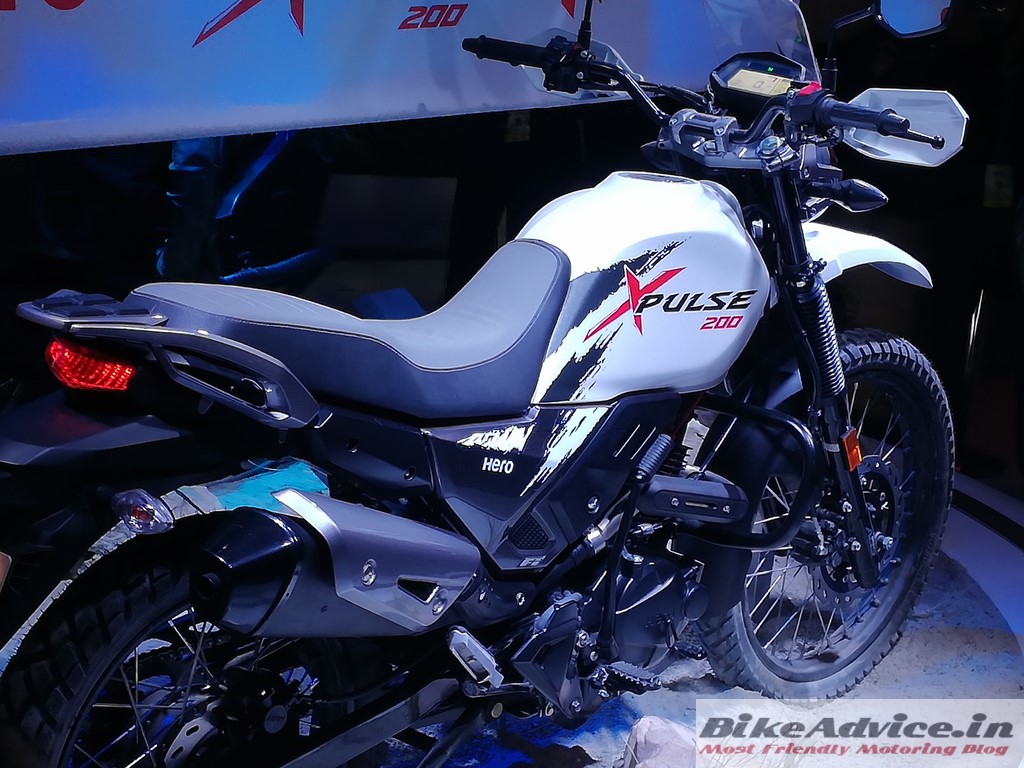 Xpulse 200 FI launch is confirmed for the domestic market – whereas the 200T will be sold with a carb. Gives us an idea of placement…

Hero is conducting the media ride of the Xpulse twins at Bangalore from today. So, far we have only seen them in various auto events but this ride reveals many new details about what will finally go into production…

Tyres: Hero showcased the Xpulse 200 with Metzeler Sahara off-road tyres at EICMA 2017 when it was a concept. The production-ready model of the 2018 Auto Expo continued with the same rubber however, final retail units will come with Ceat tyres. The 200T, on the other hand, is shod with MRF tyres, like the Xtreme 200R.

Instrument Console – The all-digital instrument console has Bluetooth connectivity and it may have navigation feature through your smartphone. Apart from that it has a gear indicator, clock, trip details (shows trip’s average speed, time, along with date), side stand indicator, apart from the regular fuel gauge, tachometer, odometer and speedometer.

ABS & Brakes – ABS will be standard on both the motorcycles and both will feature single-channel units, like it is on the Xtreme 200R. While the Xpulse 200T will get circular disc brakes, the Xpulse 200 comes with petal discs – both at the front and rear (sourced from Nissin).

Fuel Injection – Xpulse 200 gets fuel injection whereas the Xpulse 200T comes with a carburettor. This was the availability of the bikes at the media ride and we believe Hero will continue with this line-up ie there won’t be a fuel injected 200T.

Pricing – Because of this (the above point), it gets evident that Hero will want to latch onto the higher popularity of the ADV and hence, the Xpulse 200 will retail at a higher price than the 200T. The addition of FI may mean that the 200 may breach the promised 1.0 Lakh ex-showroom price tag. And the 200T may take its space!

Official launch is on May 1 which is when the prices and all other details will also be revealed. Apart from these two, Hero is also preparing a full-faired motorcycle which could replace the Karizma. You can check out its spy video here.