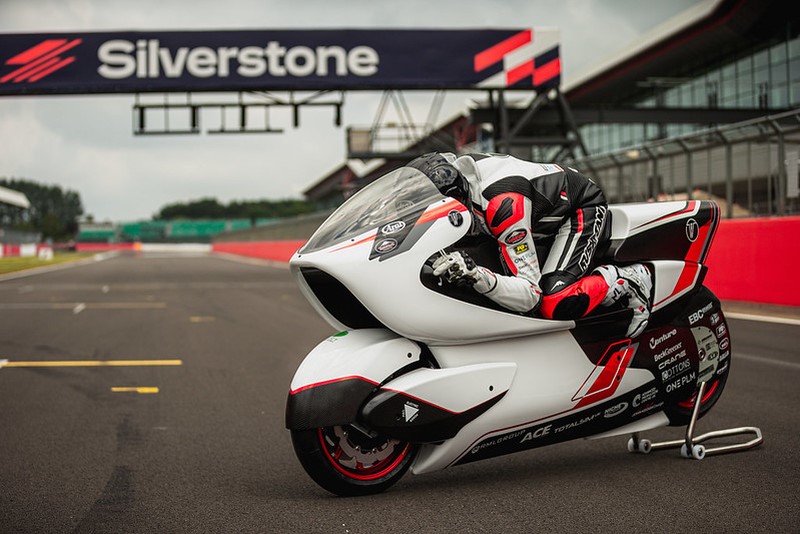 White Motorcycle Concepts has presented a revolutionary design idea that it claims will offer major gain in speeds. WMC250EV is the name!

Generally, we do not talk about speed very often for electric motorcycles. Though there is an almost instant burst of power available in a lot of cases, it just kills the range – the biggest hurdle in the adoption of electric vehicles at this point. But that aside there is a unique electric motorcycle that’s getting ready to cross that 250 mph or 400 kph top speed mark. Let us know about the e-superbike WMC250EV.

The British automaker White Motorcycles Concept has produced an electric bike which they call as WMC250EV. It is built using carbon-fiber and aluminum.

The most quirky thing about this electric superbike is its aerodynamic design. As you may see in the pictures the motorcycle has a massive duct running from between the bike.

The Aerodynamics of the WMC250EV Motorcycle

According to its maker, this system is called V-Air. White Motorcycle Concepts have patented it already. V-Air duct is claimed to decline the aerodynamic drag created at higher speeds by upto whopping 70% as compared to other powerful ICE-based motorcycles.

As the aerodynamic drag reduces significantly, the requirement for winglets on the bike is eliminated. The V-air system is carefully designed at the very point where the center of pressure is created on a motorcycle.

This design contributes to achieving a higher speed at a given power figure. It can go faster due to a higher front downforce which is five times more than that of a regular superbike running on an ICE.

Understanding the Powertrain of WMC250EV

The WMC250EV motorcycle has an aluminum chassis that holds the battery and the motor. It also sets up the connection between the swingarm and the front face. To turn the front wheels, cables are used at the steering linking point.

The bike implements two-wheel-drive system. The primary motor is from a German brand called Hacker that drives the rear wheel. For the front wheel, two more motors are used which are from Hacker as well.

The WMC250EV supports regenerative braking which is tuned with the front motor. When the bike slows down, the battery gets recharged from the energy procured during braking.

Wheels and Braking on WMC250EV Motorcycle

The longer wheelbase allows the electric bike to go fast in a linear motion. WMC uses discs from EBC and calipers from HEL which can effectively bring down the speed of the bike from 400km/h.

Yamaha Electric 2-Wheeler Under Development, But…

White Motorcycle Concepts is targeting to touch that magical mark of 400 kph in a year or two in front of everyone; and it is harping a lot on the innovative aerodynamics of the motorcycle. It has already grabbed eyeballs and if it proves to be functional, we may be up for a revamp of our upcoming motorcycle designs.