It has been in the news for sometime ever since Yamaha hinted about it and the official launch was scheduled for the Auto Expo and here we have it, the name and first ever spyshot of the Yamaha’s new scooter. 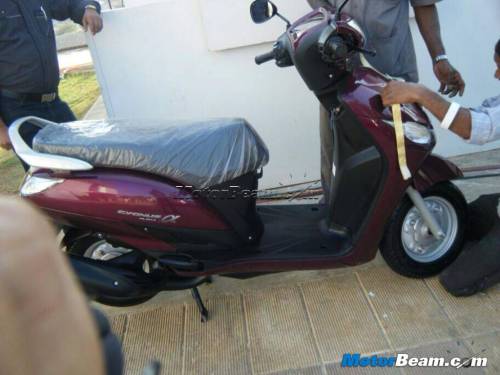 This gearless Yamaha scooter, named as ‘Alpha,’ appears more ‘unisex’ in appeal and is possibly targeted at young families in cities and towns and will take on the Honda Activa, Hero Maestro, Honda Aviator, and the Suzuki Access.

This photograph showing the upcoming Alpha has been published at Motorbeam.com and it says that the scooter shown is one of the models of Alpha named the Cygnus Alpha.

Yamaha already has a couple of gender specific scooters in its portfolio – the Yamaha Ray Z for male riders and for the female riders they have the Yamaha Ray. This new Alpha with its longer, wider saddle and more luggage space for grocery and that odd cooking gas cylinder is more of a ‘family’ scooter. The Alpha is based on the same platform as the Ray albeit with beefier suspension for carrying the extra load the scooter will be subjected to.

The engine, similarly, is expected to be the same air-cooled 113cc single cylinder 4-stroker with SOHC and 2 valves. The power and torque is delivered via a continuously variable transmission (CVT). This engine generates around 7 bhp and 8 Nm of torque and is cranked up with either an electrical ignition system or a kickstart lever.

Yamaha is also thought to be working on another scooter which will have the retro looks with modern credentials. More details are awaited but it is anybody’s guess who they have on their crosshair.