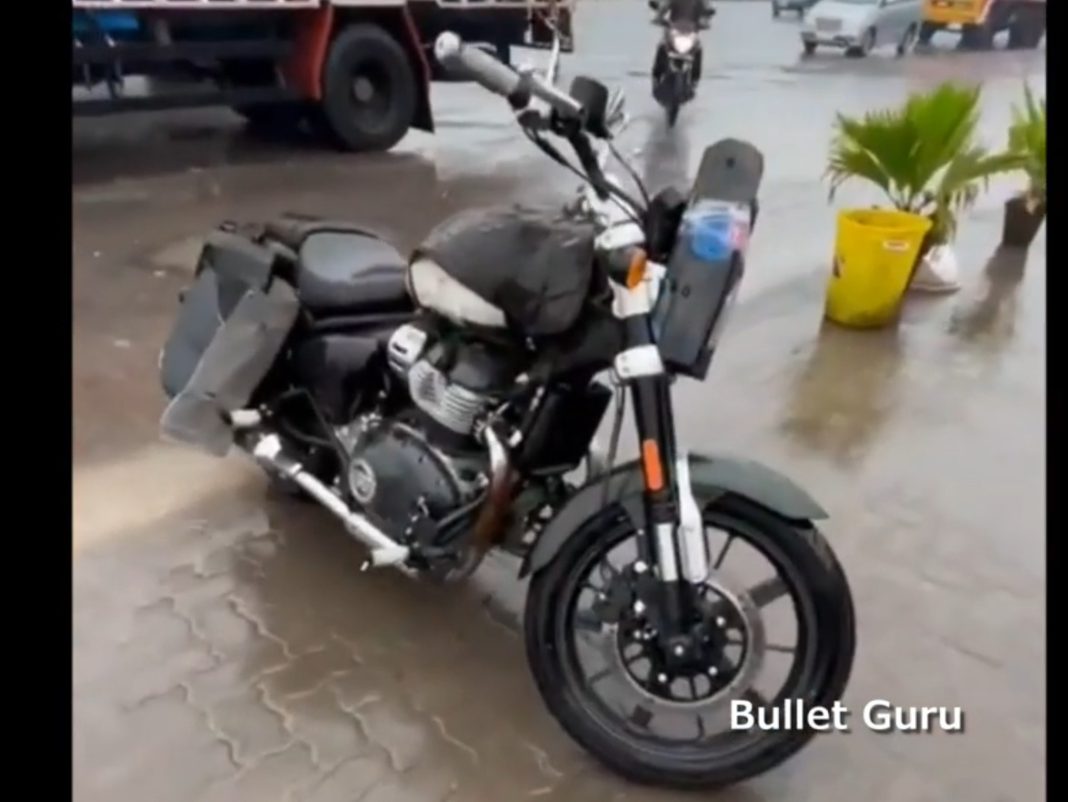 Just yesterday, we were talking about the next-gen Bullet 350 and how it is in its advanced stages of testing in India.

And today, it is the turn of its bigger sibling – Super Meteor/Thunderbird 650 – to tell us once more that it is very close to its unveiling.

So, today a YouTube channel – Bullet Guru – once again, has posted a video where we can clearly see the upcoming Super Meteor/Thunderbird 650 parked on the side of the road, flaunting its top-spec trim.

At the end of his video, we can also hear the exhaust note of the bike which is speeding away from us.

Looking at the test-bike parked on the side of the road, it is easy to see that the premium 650 cruiser is going to be the flagship offering from RE – flaunting one of the top-spec trims in the White-Chrome option.

The fuel tank and the various body panels are covered in bright White colour, which is in perfect contrast to the Black shade the rest of the bike gets covered in. The Chrome treatment has been given to the dual exhaust pipes, the company branding fixed on the engine case, the round rear-view mirrors and the steering mountings along with the top of the fork tubes.

The Chrome-Silver finish can also be seen on the front-brake & clutch levers and the foot=pegs which are forward-centric, just like the existing Meteor 350. The rest of the bike is covered by a dark colour tarp to protect the premium bike from the elements, and obviously from peering eyes (which was not very effective).

At the rear, we can also see some low-slung soft-luggage bags, very similar to what Harley-Davidson & Indian cruisers offer on their highway munchers.

At the end of the video, we can see the RE test rider mounting the test-bike and speeding away on it. It gives us a good sense of how the seating position on the bike will be. Wide & high-mounted handlebars combined with low seat height and forward-centric foot-controls means that the bike has been designed for long-distance comfortable cruising.

Looking at the overall package, the new Super Meteor/Thunderbird 650 reminds us of the popular Harley-Davidson & Indian cruisers which can be seen thumping along the American highways.

This video of the nearly finished Royal Enfield Super Meteor 650/Thunderbird 650 has got us very excited for the product Royal Enfield is going to launch really soon.

We just hope that the suspension setup is more suitable for our road conditions. Then there is no challenge to this premium cruiser in our country.