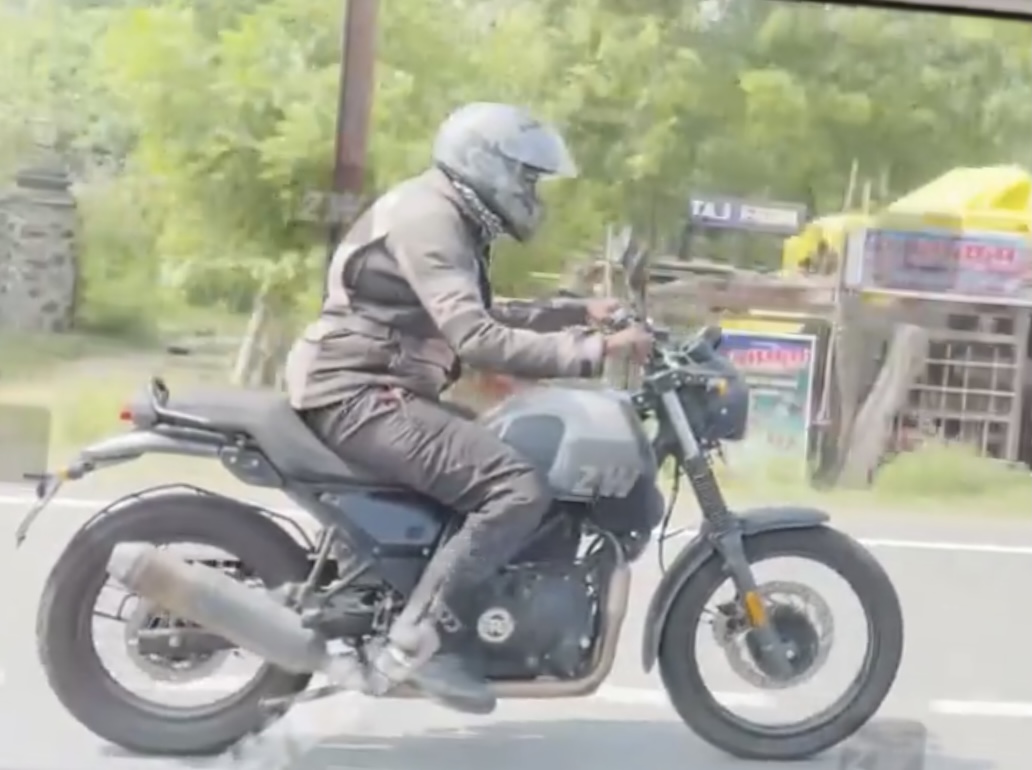 We bikers are riding high on anticipation and impatiently waiting for as many as four-five motorcycles from Royal Enfield. And all these glimpses and test-mules that are being captured on a daily basis are not making things easier for us.

Recently, another test-mule of the slightly road biased Himalayan was caught at good speed (credit – Zigwheels). This motorcycle is expected to be called as Scram (411). The sibling of Himalayan gives us the best look and is a preview of how it would look on the road.

That it is fitted with a saree-guard and most other parts tells us that it will be soon going to production, if not already.

This video comes after a few days of the motorcycle’s purported promo shoot in Goa. This was our clearest look of the bike which gave us a glimpse of one of the colours – light blue – in which it will be offered.

This look again cemented our understanding that the bike carries a city-bred styling with a slightly understated, toned-down design. We are expecting it to be a relaxed commute-friendly offering from RE.

The Royal Enfield Scram is expected to carry the same, long stroke, 411 cc, air-cooled, SOHC motor of the Himalayan. On the ADV it churns 24.3 BHP at 6500 RPM and 32 Nm at 4500 RPM and its paired to a 5-speed gearbox. For differentiation and to justify the different application, there is a possibility that the Scram could get a different tuning and probably a retuned gearing.

The Scram is running on a smaller front wheel – likely 19”- compared to the Himalayan’s 21”, while carrying a similar rear wheel. From the side, the bike sports tiny tank shrouds which will probably be decorated with stripes in the production model.

Here is the video…

The spied bike gives us a good look of the upswept exhaust, split-seats, body panels and an overall blacked-out styling. At the rear, the Scram is equipped with standard grab-rails, tail-lamp and turn indicators.

LEAKED! Now RE Super Meteor 650 Revealed in a Video

It continues with a round headlamp, and gets standard tyre-hugging front fenders and misses fork gaiters. It doesn’t seem to carry any wind protection accessories such as the front fly-screen or any small fairing elements.

With this update, we are only waiting for an official confirmation from Royal Enfield about its launch date – that we believe could be in the next few weeks…