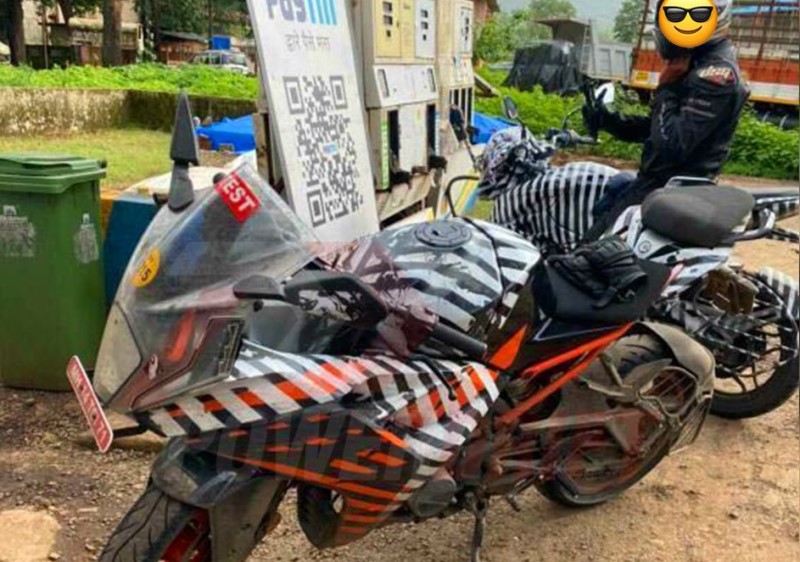 Pulsar 250 spy pic along with the new RC suggests that Bajaj is testing both of them together. The 250 is a BIG change and is waited anxiously…

After years of its presence in the Indian market, Bajaj is going to update its Pulsar lineup with its new-generation which will also include one or more 250cc bikes – according to reports. The upcoming Pulsar has been spotted yet again – this time with the new-gen RC as well.

This is the naked version of the upcoming model which resembles the existing NS series. It follows the same philosophy of an aggressive muscular tank and flowing body ending on a narrow tail.

Currently, the Pulsar 220F, Pulsar 150, and Pulsar 180 have a huge demand and they still carry the classic pulsar design that has been in the market since 2001. So, the new-age Pulsars will be a refreshing change.

These newer Pulsars will be relatively simpler with air-oil cooled engines and not-so-flashy specs. In fact the biggest Pulsar 250 could churn around 24-25 PS of power – similar to the existing Pulsar 200 NS/RS. And that poses a confusion as to what happens to these models. We have already discussed the possibilities here.

It will be interesting to see how will the new Pulsar 250 be received by its fans.

Along with the Pulsar 250, you can also see the upcoming 2021 KTM RC. We aren’t completely sure which RC is this but it could be the smaller models – 125 or the 200, going by the MRF tyres that it is sporting.

In another sighting, the new-gen RC (probably 200) has been snapped in a video. Check it out…

The new Pulsar should get LED headlamps along with a new instrument console – that it so dearly needs. There is a faired version of the new Pulsar as well that has been spotted and chances are that either one of them or both will be launched sometime later this year.