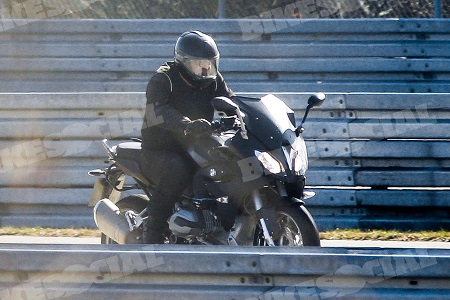 The flat twin “boxer” engine is as characteristic of BMW Motorrad as the 350 single is to our RE Bullets. The new breed of these “boxers” are air/oil cooled and can develop some serious bang depending on the model.

The newst are tuned to pump out a good 125 bhp. The new breed boxers are said to be not clanky as their ancestors and are designed to ensures optimum running smoothness and ‘silken-soft’ pulling power across the entire engine speed range while still keeping the characteristic of a two-cylinder engine.

The new sports tourer under development at BMW Motorrad is expected to have this new breed of “boxer” called the “wasserboxer” or “water boxer” engine with “vertical-flow” heads and ride-by-wire electronics featuring five modes that influences throttle response, power delivery and other parameters to keep everything accurately German.

The new bike has been spied (pic credit: Bennetts.co.uk) which is expected to take the luxury-touring bike segment a step further with its new electronics including traction control, anti-lock braking system, Bluetooth, and more. It is also expected that the new bike will feature the “Optional Shift Assistant Pro,” which will let riders up and down shift without bothering the clutch or the throttle. A few more tweaks and the bike may well ride itself.

This new BMW’s 1170cc Sports Tourer will sit in between the F800GT and R1200RT and may well end up being called as R1200GT or R1200ST! (GT – grand tourer, ST = Sports Tourer). Launch is expected at Cologne Motorcycle Show in October.

We, in India haven’t really woken up to the possibilities of long-distance touring on a bike tailor made for the purpose. The steep asking price of ownership being the main pothole on that road. The new offering from the Motorrad is expected with a base price equivalent to INR 15 odd lacs and more with saddlebags, proprietary GPS and all.