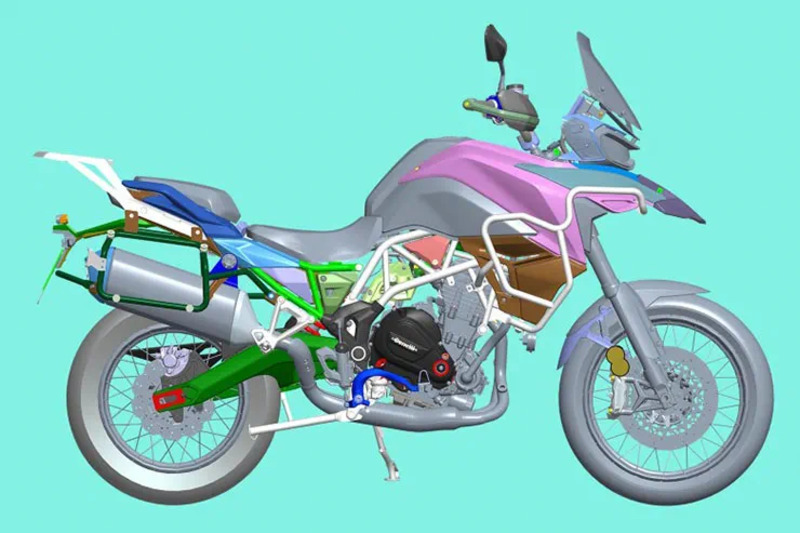 So, back in April 2022, we reported that Benelli is working on their new and upcoming ADV – TRK 702 – with ambitions to take on the popular and much-adored Yamaha Tenere 700. This new ADV is destined to fill the gap between the TRK 502 and the flagship TRK 800 ADV models.

Now 3 months on, new further information has leaked in the form of Design Registration giving us better look at the styling and technical aspects of the ADV. It also reveals that the new ADV could be taking the fight to upper premium ADV segments by sporting some advanced camera features.

In the previous report, we mentioned that the new TRK 702 will be borrowing the frame design from its TRK 502 siblings, with some tweaks to house the new engine. The engine will be the same 693 cc, twin-cylinder engine, which is used on the new CFMoto 700 CL-X bike. This engine is slated to produce around 75 HP, similar to the performance numbers of TRK 800 ADV.

However, the interesting feature to note in the new bike is the use of camera systems at the front as well as the rear. The system appears to be something similar to what Kawasaki was spotted testing on the next-gen H2 SX sports-tourer, where they are trying to take the radar cruise control to the next level.

A similar system is also seen on the Ducati Multistrada V4 S sports-tourer machine which utilises Radar systems mounted at the front as well as the rear, which integrates with the Cruise control of the bike and matches the speed of the vehicles around it on the highways. We expect something similar on the new TRK 702 ADV, but only utilising the camera system.

This will not be the first bike from Benelli to sport such a camera-based technology. Benelli is using similar tech on their 1200GT tourer machine which is offered in China. These camera systems can also be utilised as dashcams to record riding footage to be reviewed later by the rider or the authorities during any untoward event.

All these features and the bike itself sound very exciting, however, there is still a long wait to see this bike make its debut. Some reports suggest that the new TRK 702 could be launched around 2024 or later.

By then, we hope that our ADV market matures enough for the brand to see the potential of our country’s market and decide to bring it here as well…