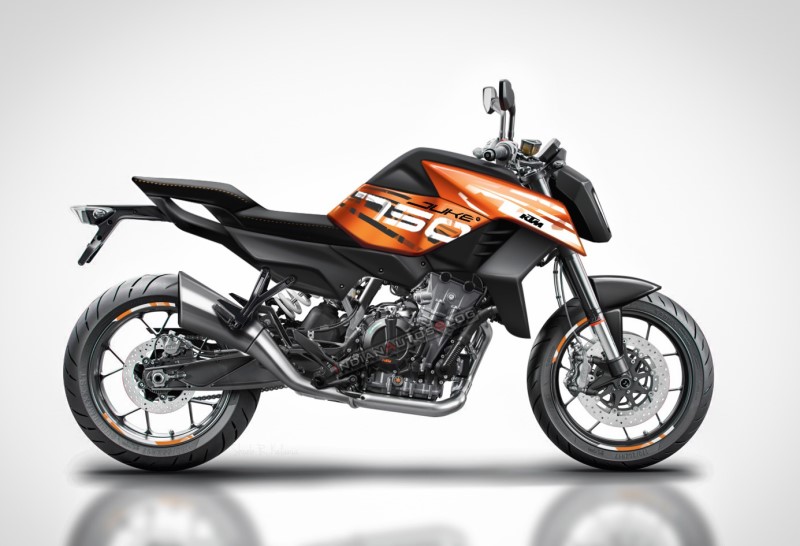 Upcoming 750 Duke pic (rendering) has been shared on an online portal. The 750 platform will spawn two more models at least…

KTM has officially confirmed in its investor presentation that it is making a 750cc platform that will spawn various new motorcycles, including the most versatile design – Duke (details). The 750 Duke and other models on this platform will be developed in partnership with CFMoto with which the Austrian has a partnership in China.

CFMoto has a factory in China which makes KTM branded motorcycles for the Chinese market. And based on this update, an online portal has imagined how the 750 Duke may look like. This upcoming 750 Duke render does take inspiration from the 790 Duke but it is even more aggressive. It has a sleeker design with upside down front forks and an upswept exhaust.

We are not sure how close is this imagined rendering since there are no spy shots that have surfaced so far. But what we do know is that KTM is making at least three models – the 750 Duke, 750 Adventure and the 750 Supermoto T.

It must also be noted that this 750 will be an additional product range which means the 790 and 890 motorcycles will continue to be on sale. It gives us a good hint that these products may be exclusive to each other which means that they may not be present in one single market together.

For us in India, KTM is developing a new 490 range which will be manufactured by Bajaj at its new, upcoming plant near Pune (more details).