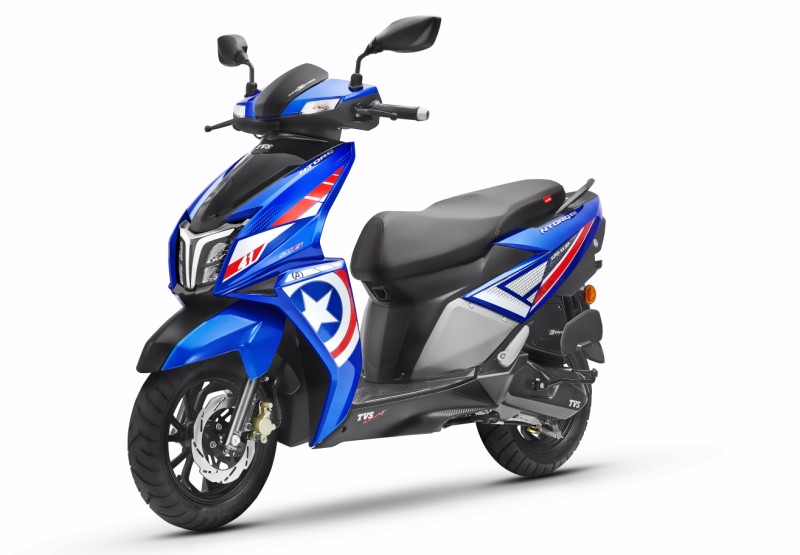 TVS Ntorq Marvel editions are inspired by the most popular Disney characters like Iron Man, Captain America and Black Panther…

Now, in order to bring it to headlines just ahead of the festive season, TVS has officially announced the launch of Ntorq SuperSquad Edition which is inspired by Marvel’s Avenger characters. There are these three variants that have been introduced…

Ntorq Stealth Black – This edition is inspired by the character Black Panther. It is probably the best looking variant of the lineup. It gets purple colored decals over base color black. It also has signature salute Wakanda Forever along with the number 66 (which is the year when Marvel introduced it to the world).

Ntorq Invincible Red – This edition is for people who like bright colors and it is inspired by Iron Man. The decals try to replicate the Red and Gold suit of Iron man and his helmet is embossed on the leg shield. It bears the number 63, which is the year in which this character was introduced by the company,

Ntorq Combat Blue – As you can make out, this shade is inspired by Captain America and gets three tone color theme – blue, white and red. It adorns the number 41 which is the year when Captain America was introduced in Marvel Universe.

For these editions, TVS has partnered with Disney India’s consumer products business. These special Ntorqs are priced at Rs 77,865 (ex-showroom Delhi) which means that the company is charging Rs 2500 over the Race Edition for these SuperSquad variants.