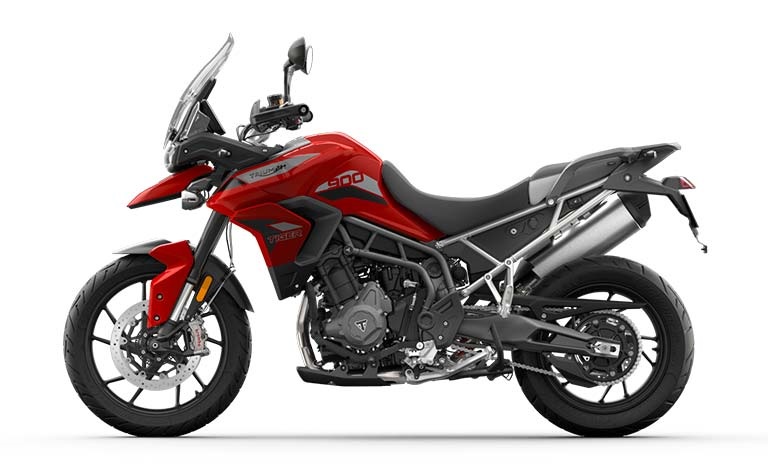 Triumph Tiger 900 price ranges till 15.5 Lakhs and has three variants on offer GT, Rally, and Rally Pro. They differ on their trail-worthiness!

Triumph, the largest UK-owned motorcycle company, has finally launched its new motorcycle – the Tiger 900 in India. The bike comes in three variants – GT (which is the road-biased version), Rally (the off-road version), and the top-end Rally Pro.

The motorcycle was originally scheduled for launch earlier this year. However, it got delayed due to the COVID-19 pandemic related lockdowns. The new model comes as a successor to the popular Tiger 800. Triumph dealerships across the country have now started accepting bookings for the models officially.

All the three variants come equipped with Brembo Stylema brakes with four-piston calipers and 320 mm disc at the front. At the rear, the bike has a 255 mm single disc run by a single-piston caliper.

The motorcycles house an 888 cc, three-cylinder engine, that produces a healthy 94 hp of peak power and 87 Nm of max torque. The engine has a unique 1-3-2 firing order, that gives it a completely different revving character, as compared to its predecessor.

All the three variants come with multiple ride modes, including rain, road, and off-road. Also, the bikes are equipped with IMU-based cornering ABS, traction control, and a feature-packed 7-inch TFT instrument screen.

The top-end version of the motorcycle also gets LED fog lamps, bi-directional quick-shifters, tyre pressure monitoring system, My Triumph connectivity system and heated rider and pillion seats. The bikes also have a 20-liter fuel tank for an extended range.

The Triumph 900 is pitted against the new BMW F900 XR and Honda CRF1100L Africa Twin. Do the Tigers look more tempting?