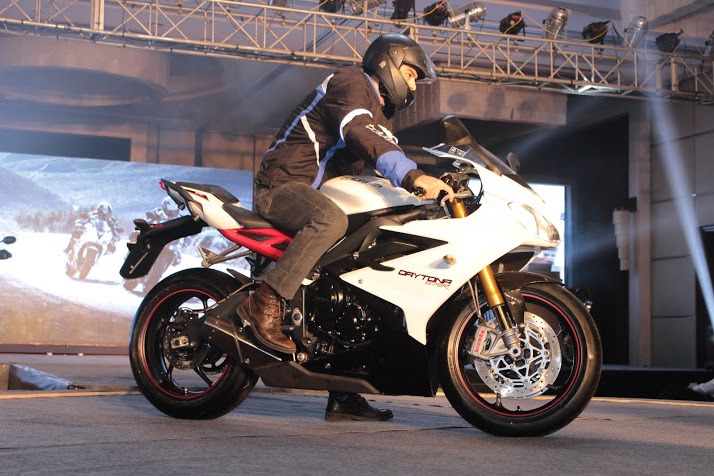 Wait over, guys. The British babes are out!

It has been more than a year since the Auto Expo of 2012 when Triumph first announced its plans to enter the Indian market (Check Triumph 2012 AE Stall).  28th November 2013 was the day when they chose to do it, finally!  A total of 10 bikes were officially launched in Delhi and one can book one of these starting 9th December 2013. 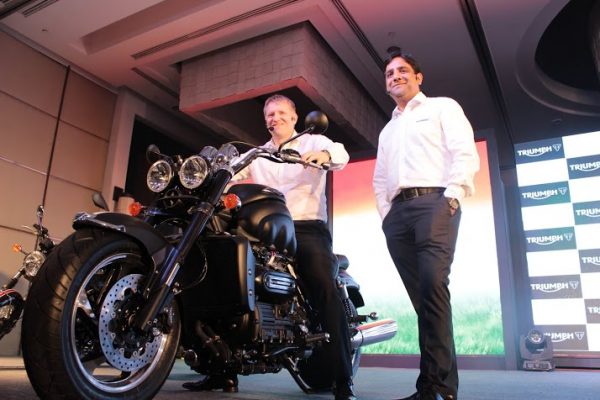 Out of the total 10 models that will go on sale shortly, the Classics, the Roadsters, and the sole Supersport will be assembled at Manesar, Haryana.  The remaining four bikes, two of both the Adventure and the Cruiser series will be brought in imported (CBU).

All bikes carry a 2 year unlimited mileage warranty. Bangalore and Hyderabad launch will be in the middle of December, followed by Delhi and Mumbai in January 2014.  Other tier I cities can expect these bikes during March the same year.

The bikes coming in the CKD route are: 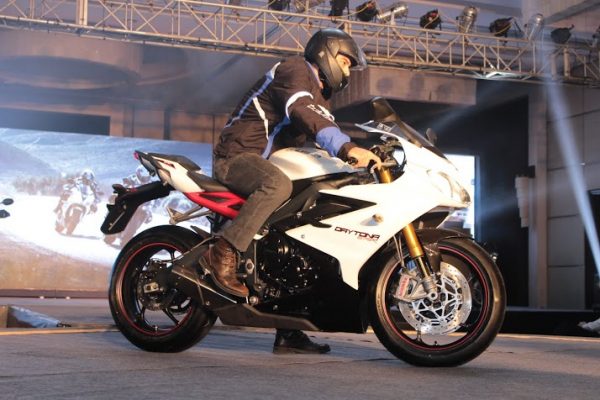 The beautilicious Daytona 675R commands a price of Rs. 11.4 lakh. This supersport bike has a liquid-cooled, 12 valve, DOHC, in-line 3 engine which is manipulated through a 6-speed gearbox. This track-day bike has 126 hp and 74 Nm of refined and sustained grunt to go with its eye-catching design. The bike for now though will come sans the ABS. 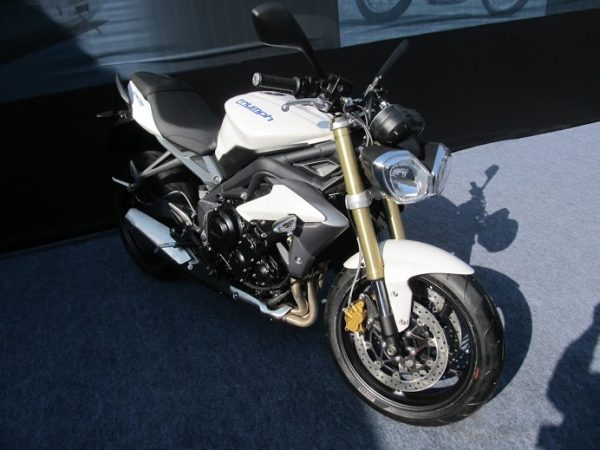 The 675cc Street Triple is priced at Rs 7.5 lakh. This mean, aggressive looking bike with its distinctive twin-diamond shape headlight delivers quite a punch for a middle weight. The 104 hp/68 Nm engine is pretty much similar to its supersport cousin but the gearing and torque spread is geared for fast-paced urban riding. 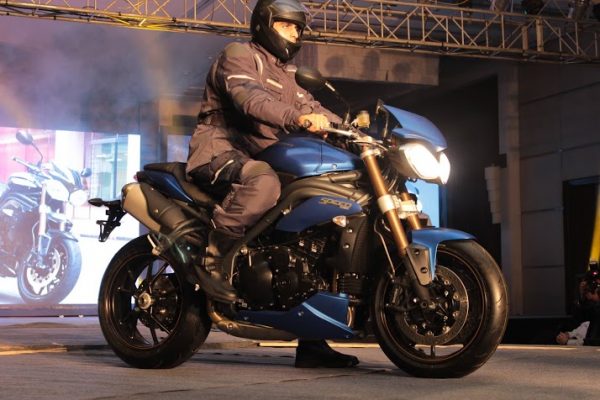 The naked bigger bro, the Speed Triple, naturally packs in more. It can be had for Rs. 10.4 lakh and looks sharper and meaner than its smaller sibling. The 1050 cc engine delivers a whopping 133 hp of power and 111 Nm of torque. It comes shod with a stainless steel 3 into 1 into 2, twin high level silencers, which are designed to enhance the engine’s already phenomenal torque output. It also lets out a snarl that is guaranteed to attract all kind of attention, desired and otherwise.

Triumph’s most wallet-friendly bikes are from their Classic range. Triumph is bringing all the three retro bikes in its catalog into India CKD.  If you like your history books, you will love these bikes. 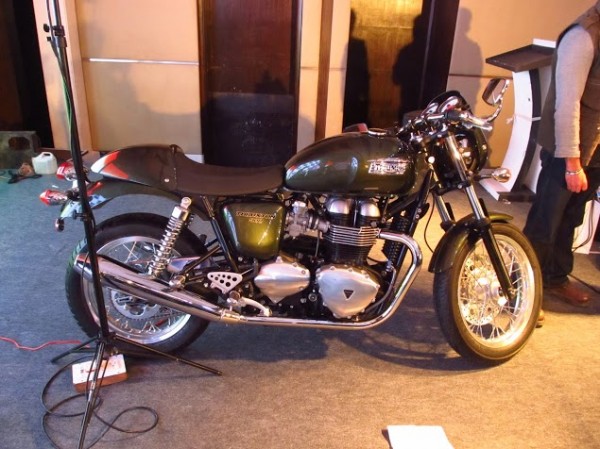 Bonneville, priced at Rs. 5.7 lakh, is the cheapest bike out of Triumph India stable. The 865 cc air-cooled, parallel-twin has that unmistakable period looks and is capable of generating 67 hp and 68 Nm. The engine is nestled in a simple tubular steel chassis and it aids in easy steering and very good balance at all operating speeds.

The Bonneville T100 with its retro 60s styling is priced almost a lakh more at Rs. 6.6 lakh. It has the same 865 cc parallel-twin as the Bonneville standard but with a taller gearing for better cruising speed. The spoke wheels and the amount of chrome also stands it apart from the other Bonnie. The bike boasts a dual tone color scheme and a more comprehensive instrument cluster with tachometer and warning lights. The stretched out saddle and placement and rack of the handlebar are also different from the standard Bonneville. 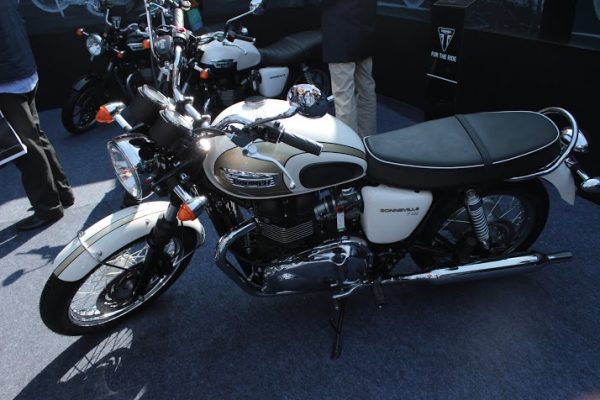 Both the Bonnies and the Thruxton (below) come deployed with a 5-cog gearbox.

Priced at Rs. 6.7 lakh, the Thruxton is the most expensive bike of the Classic line-up. This café racer straight out of 1960’s Britain features a dropped down handlebar, up-swept exhausts, and what appears to be a single seat (until you remove the covering that hides the pillion). The 865 cc parallel twin puts out a healthy 68 hp with 69 Nm of torque and despite its dated looks the fueling is handled by an on-board computer for better efficiency and emission levels.

People who have been waiting to see a cruiser or an adventure tourer from the Triumph brand have every reason to be disappointed.  These genres of bikes will be imported into India and their prices accordingly tell.

The shaft-driven Rocket III Roadster has the distinction of having the world’s biggest production motorcycle engine. The 2.3 litre, three- cylinder engine lets out 148 horses and a tractor-troubling 221 Nm of torque. The bike is priced at Rs. 20 lakh. 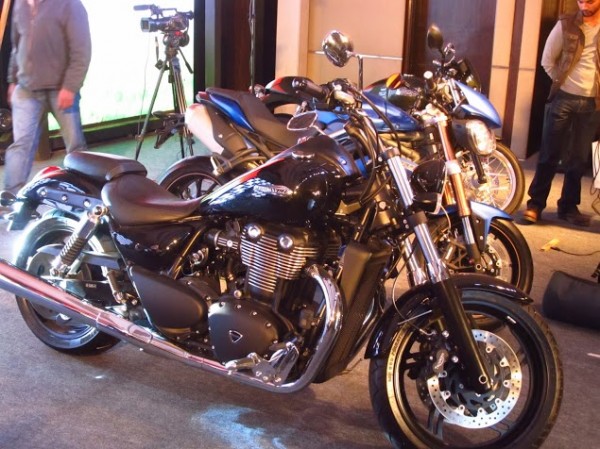 The smaller (compared to the Rocket) Thunderbird Storm is priced at Rs. 13 lakh and comes with a 1700 cc engine capable of delivering 97 hp and 156 Nm.

Triumph has a couple of really capable and purposeful looking bikes in this category, but alas, they are CBU for now.

The rugged Tiger 800 XC comes with a price tag of Rs. 12 lakh. The 799 cc liquid-cooled, in-line three-cylinder is a proven workhorse and is capable of a good 94 hp of power and 79 Nm of torque. This is one of the best middle-weight all-terrain bikes out there and it is a pity that Triumph has no immediate plans to bring it CKD into India. 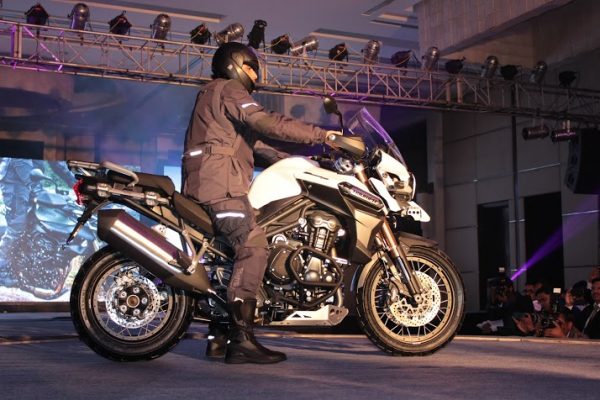 The Tiger Explorer priced at Rs. 17.9 lakh is bigger and heavier of the two.  The bike’s 1215cc three-cylinder engine has 133 hp and 121 Nm on tap and has a reputation of being a real long legged, cross boarder adventurer.

Triumph may be credited with bringing the adventure touring segment first into India, but its steep pricing means KTM will probably have the final laugh in this particular segment.

Leaving that aside, how many of you are itching to let your hands onto one of those beauties..?