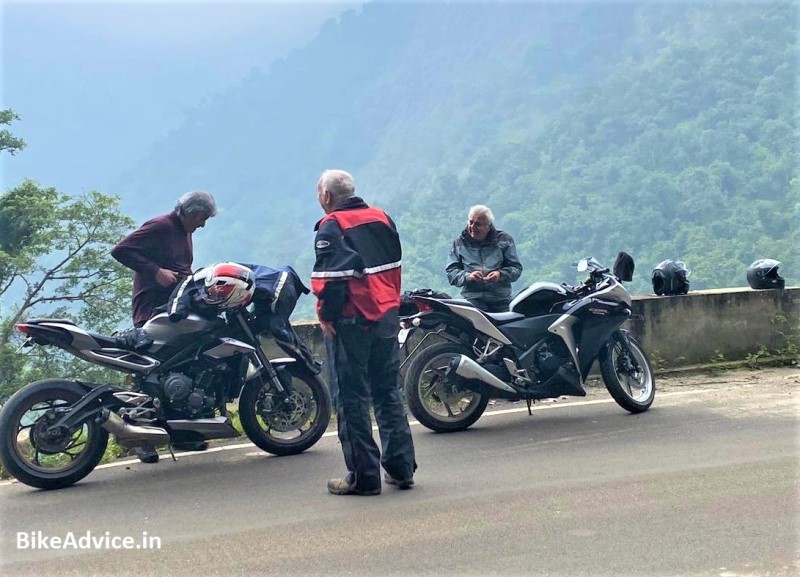 Ten months ago, A.R. Srinath and I decided to venture on the Adukkam road.  The tennis tournament at Mundakkayam, in Kerala, beckoned and this would be the shortest route down the hill from Kodaikanal.  Undiscovered and relatively new, it was a delightful drive to Periakulam in my Ford EcoSport with the eco-boost engine.  The road was in spanking condition with just five or six kilometres, toward the end of the hill section, yet to be tarred.

Yesterday my stalwart companions, Kishore and Mac, decided to show Tiger Varadhu this new stretch of road. He was probably as surprised as we were. Vast panoramas of scenic beauty were offset by the condition of the already crumbling road. Gangs of workmen were busy with repairs over numerous sections; there was loose mud lying over thinly laid tar and water running over several such patches made for a treacherous ride.

It was completely unplanned. The impromptu ride began when Varadhu, who had just unloaded his bike from a lorry, which brought up furniture for his home on Sivanadi Road, had arrived from Chennai.  Nevertheless, he was keen to swing a leg over the saddle immediately. Setting off after lunch we met up with Kishore, who was waiting for us at Perumalmalai.  However, there was little time to waste under a heavily overcast sky.

Barely stopping to greet Kishore, we took a sharp right turn off Law’s Ghat Road, plunged down a steep slope and instantly had to maneuver a tight hairpin bend. Exciting as the prospect of a ride was, I was uncomfortable over muddy sections that covered large patches of the deteriorating road. The dashed bike was fishtailing at the least excuse. Kishore said he too wasn’t happy riding over these tracts, much like an off-roading extravaganza. Mac didn’t say much. Obviously adapting to the surface, he simply had no complaints.

Tiger Varadhu on the Triumph Street Triple, fitted with racing tyres, didn’t look too happy. The wrong bike with completely the wrong tyres… but then he is a rider par excellence! Responsible for bringing the California Bike Riders Club to Chennai every winter, he has been at the forefront of Indian bike riding for decades. The problem for Kishore and I was resolved when we checked our air pressure, at the second petrol bunk down in the plains.

I had checked the air at the Indian Oil petrol bunk in Kodaikanal the previous day. Turned out I had five pounds too much in the rear tyre: as for Kishore, he had been riding with only seven pounds in the rear! After that we thoroughly enjoyed the rest of the ride back, up the main Law’s ghat road, to get home before dark. Enervated and happy we can’t wait to hit the road again!