After a long, pitiful wait, Hamamatsu-based motorcycle behemoth Suzuki has unveiled the Inazuma in India. The Inazuma is a rebel of sorts; it takes on the burgeoning quarter-litre segment of India with an approach and identity of its own. It, however, comes with a hefty price tag of INR 3.1 lakhs ex-showroom New Delhi.

Will the Inazuma reverse the tide in Suzuki’s favour? Let us find out.

Frankly, the Inazuma appears a bit dated. And out of place too.

For a bike that is priced at 3.1 lakhs, potential buyers should not be shooed away by showcasing a chromed-twin exhaust setup that reminds us of lower-priced mass produced vehicles like the Zeus and Heat. The designers at Suzuki can be accused of trying too hard to imbibe the design cues of the much-larger Suzuki B-King (which, by the way, looks a killer). While the bike does have a few classy pieces like the three-spoke aluminium wheel and the radical headlamp mount, one must acknowledge the fact that these individual elements do not merge seamlessly to create an appreciable form.

The insipid styling of the rear grab handle doesn’t help matters, either.

The powerplant goes hand-in-hand with the styling department. The Inazuma appears a bit of a slouch with its lackadaisical approach to styling, and so you shouldn’t really expect a screaming top-end figure or a bike that scorches the tarmac while on its way off the signal post.

Inazuma is powered by a 248cc twin-cylinder, liquid-cooled engine. Very interestingly, the power and torque outputs of the engine have been kept guarded behind a thick veil of secrecy, as of now. 🙂

Internationally Inazuma produces power figures of around 26 bhp and torque output of 22 Nm. Indian Inazuma is expected to be very similarly specced. The engine is expected to have oodles of low and mid-range torque.

The Inazuma’s Unique Selling Proposition is its comfy seating position and high-set handlebars. These factors will make it a very viable proposition in the crowded environs of today’s urban areas, and the expectedly punchy 250cc motor is also expected to ensure that the bike can be taken out for lengthy rides on highways. The bike isn’t equipped with a split-seat, either. However, we are worried about the lack of the windscreen on open highways. It will leave a lot of wind-buffeting for the rider’s chest. 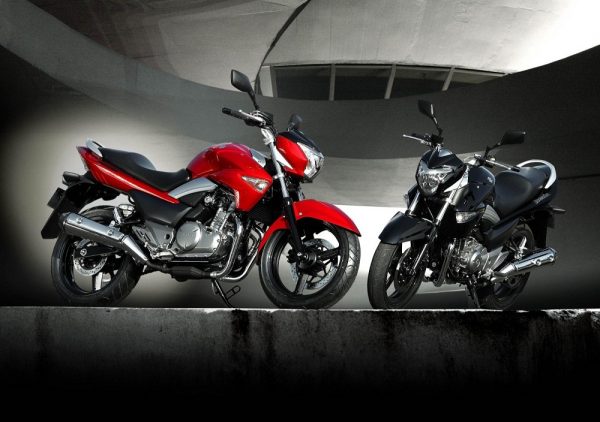 Not many colours to choose from. The Inazuma will be available in India with a choice of two colours.

Inazuma is priced at INR 3.10 Lakhs Ex-Showroom Delhi which translates into a figure of something around 3.4Lakh on road. And for costlier cities it is expected to retail at something close to Rs 3.5 Lakhs. This is a bit of a dampener for the sales prospects of a bike that isn’t really a conventional good looker. And oh, didn’t we mention that the Inazuma will tip the scales at a whopping 183 kilograms??

Suzuki feels that the Inazuma is a practical bike and it will be attractive for the youth, college-going students and motorcycle enthusiasts in metros. Will the Inazuma be able to tackle the other established challengers like Honda CBR 250R, Kawasaki Ninja 300, KTM Duke 200 and the Hyosung GT250R?

Click on the following pic to open Inazuma brochure in pdf. 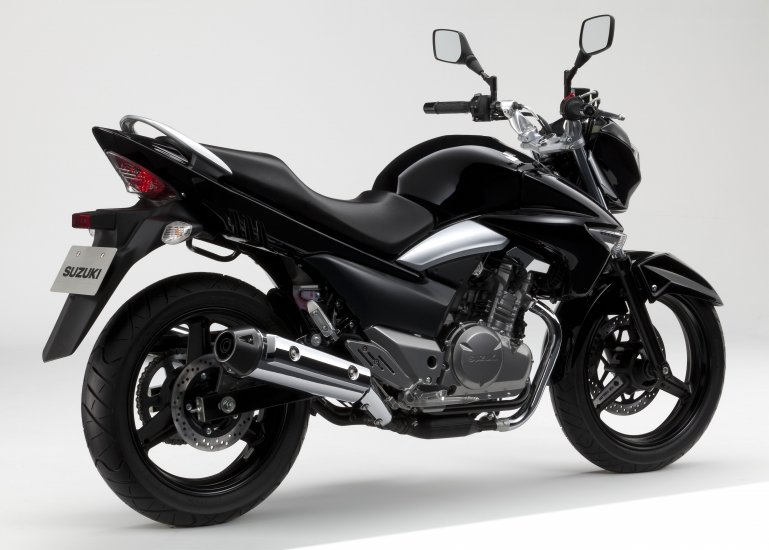 Frankly speaking, apart from the two-cylinder motor we really do not see much in this bike at this insensible price point. The odds are stacked against the Ugly Duckling. It will need more than just its own share of luck to pull off a reversal for Suzuki.

So, how many of you will consider buying one?