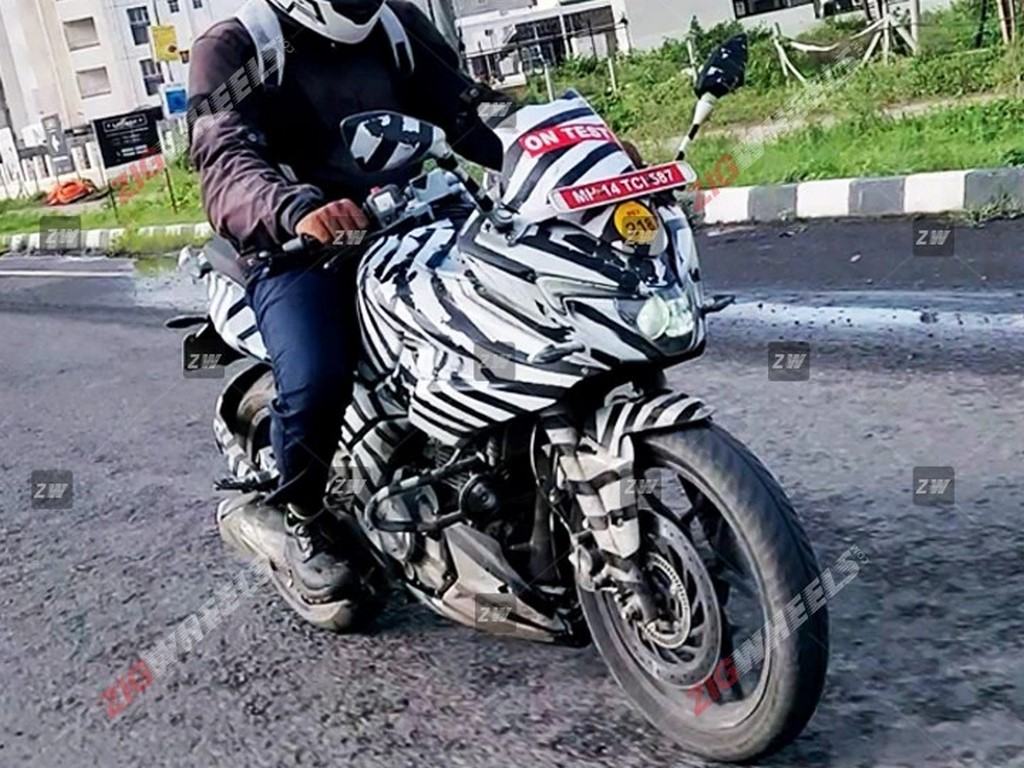 It seems that the Pulsar 250F is higher on the radar of spies. Once again the test mule of the semi-faired model has been captured on the roads of Pune. But what this latest spotting reveals is the face of the upcoming Pulsar for the first time.

The 250F is coming with a fresh headlamp design. Yes, the vertically stacked projectors of the Pulsar 220 have been ditched and there is one single headlamp with eyebrow-like two LED DRLs over it.

The overall headlamp design looks slightly wider than the current Pulsar 220F. Instead of bulbs, the side indicators now get LEDs. A closer look and we can not fail to notice the uncanny resemblance with the now discontinued faired Discover 150F’s face in there! But unlike both the Pulsar 220 and Discover 150F – two of the company’s semi-faired models, this time the fairing gels better with the body.

There is a new LED tail lamp as well which either could be called inspired from letter X or H!

The upcoming 250F gets the usual clip-on handlebars positioned pretty higher. The exhaust is strikingly similar to that of the double-barrel unit of the Dominar 400. Instead of dual nitrox suspension, the bike gets a mono-shock absorber linked to the swingarm. It continues with conventional telescopic forks at the front.

The motorcycle is also running on the same alloy wheel design and braking system that we have on the Pulsar NS200. The bike is also speculated to get the VVA tech that we discussed yesterday.

The motor is built on an all-new platform and not on the Duke 250’s – to keep it cost effective. There is an air/oil cooling set-up – a downgrade from the liquid cooled unit of the Pulsar NS200.

This is the most complete test mule we have seen so far and frequent spottings suggest that we may be closer to the motorcycle’s official unveil. We believe Bajaj will definitely launch the new-gen Pulsars in the coming few months – definitely ahead or around the festive season.