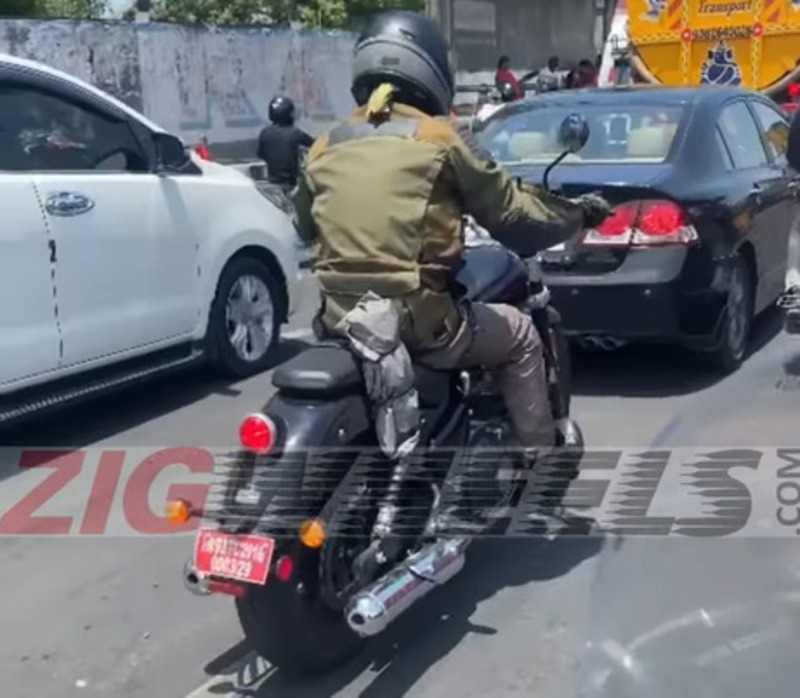 The Royal Enfield Super Meteor 650 test-bike has been spotted once again being tested on Indian roads and once again the test-bike is spotted in near-production avatar.

Looking at the extent of fit and finish of the test-bike, it looks like the bike is undergoing final test-runs and this means that the Super Meteor 650 could make its debut by the end of this year.

It is strongly rumoured that Royal Enfield ‘Super Meteor 650’ will be the next premium offering from the company in the 650 cc platform.

However, recently due to a slip-up by the company, the name ‘Thunderbird X 650’ got captured from their official service website, hinting that one of the next 650 models could be named ‘Thunderbird 650’. Could the bike we keep referring to as ‘Super Meteor’ might launch as the ‘Royal Enfield Thunderbird 650’!?? Cool name though!!

Additionally, thanks to an online portal, a video of the Super Meteor/Thunderbird 650 test-bike has also been shared which reveals the Exhaust Note of the new bike. It could be due to the smartphone audio setting from which the video was captured, but the exhaust note of the bike carries a robust grunt, which is different from the existing 650 twins.

Looking at the images closely, we can spot a twin-pod instrument cluster design which has been spotted on previous test-bikes as well.  The bigger instrumentation pod will be a Semi-digital dial with a digital inset within it, while the smaller pod will house the Tripper navigation unit. We hope that the Tripper Navigation will be offered as standard on this model, as RE have recently removed the Tripper Navigation as standard equipment from the Himalayan and Meteor 350 models.

One of the images has further confirmed the riding position of the upcoming cruiser. The forward-centric footpegs are very similar to the riding position of the existing Meteor 350. This means that the rider will sit with his/her feet in the forward position with most of the weight being put on the lower back of the rider. The suspension setup could be one of the make-or-break factors for the upcoming cruiser.

One point we are very confident of is the powerhouse sitting within the chassis of the new bike. It will be the same 648 cc, parallel-twin, air&oil-cooled unit that powers the existing Interceptor 650 and the Continental GT 650. The performance characteristics of the engine could be tweaked a little bit, but the output will be the same 47.6 HP and 52Nm of torque – connected to a 6-speed transmission with a slip-and-assist clutch system.

In other new, before the Super Meteor/Thunderbird 650 makes its debut, Royal Enfield is preparing to launch their Hunter 350 in the Indian market. Read the launch timeline and details about this roadster bike here.