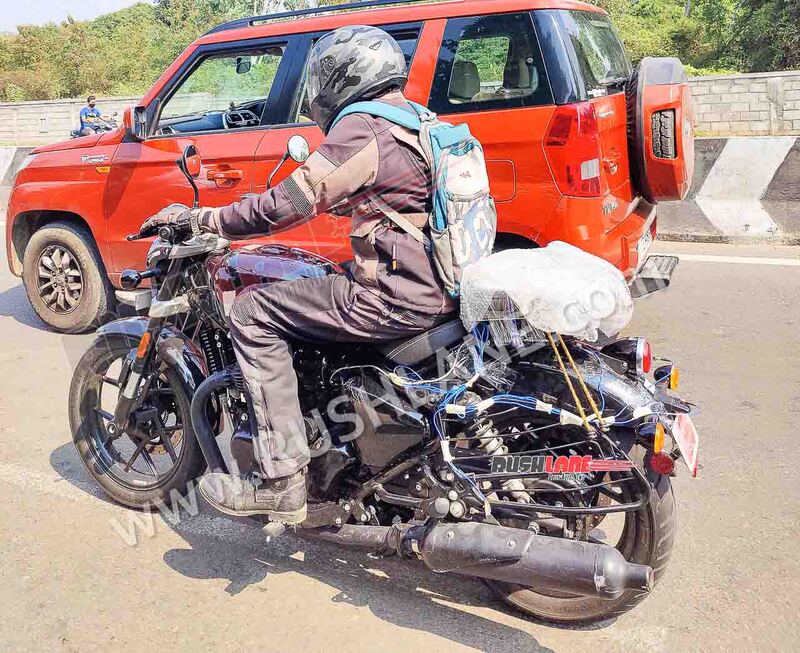 Generally there is a long road between the bike that is first revealed as a concept and the production version that we finally get to own. Months, even years, pass while the final product takes its shape. However, sometimes this long duration is cut short by small peeks and glimpses that surface here and there.

Back in November 2021, the SG650 concept which was revealed by Royal Enfield at the EICMA show, became a showstopper. RE said that this is “The link between the past and the future”.

Well, the ‘Link’, it appears, is coming along nicely. For the second time in two months, the SG650, or Shotgun according to some rumours, has been caught testing on Indian roads.

This is a better sighting of the SG650 test-bike. Previously, the mule that was spied testing was heavily camouflaged and hence, not a lot was known.

This time we can see a whole lot of the bike. At first glance we can see that the bike’s design has not deviated much from the concept. It still continues to have RE’s classic design language.

The instrumentation appears to be semi-digital construction. The details in the images are a little fuzzy, but we can see that the instrumentation is made up of one large round pod with a small pod on the side. The large pod seems to have an analogue tacho at the top, few indicator lights at the bottom and small digital display in the middle. The second small pod is likely to be the Tripper navigation pod providing turn-by-turn navigation to the rider.

Looking at the chassis, the bike, being a test-unit, carries a subdued all-Black look. Everything from the tail-light, to the frame & engine bay, to front shocks is blacked-out. The seating posture of the rider appears to be upright and relaxed. This is aided by centrally mounted foot-pegs, a low seat and higher set handlebars.

The Shotgun is utilising USD forks at the front combined with twin coil-over shock absorbers at the rear. It is also equipped with massive disc rotors in the front and rear which could be 320 mm and 240 mm respectively. The braking will be aided by ABS as standard.

Being based on the 650 platform, it is safe to assume the Shotgun will share the same engine as the other 650 siblings – Interceptor 650 and Continental GT 650. On the twins this 648 cc, parallel-twin, air & oil cooled unit produces 47 HP and 52 Nm of torque. The engine will be aided by a 6-speed transmission.

While sharing their plans a few months earlier, Royal Enfield announced that they will be bringing three motorcycles in the 650 cc segments. The SG650 sighted now, combined with sightings of Super Meteor 650 and alleged Classic 650 brings the total to three new bike that will join the company’s stables in the near future.