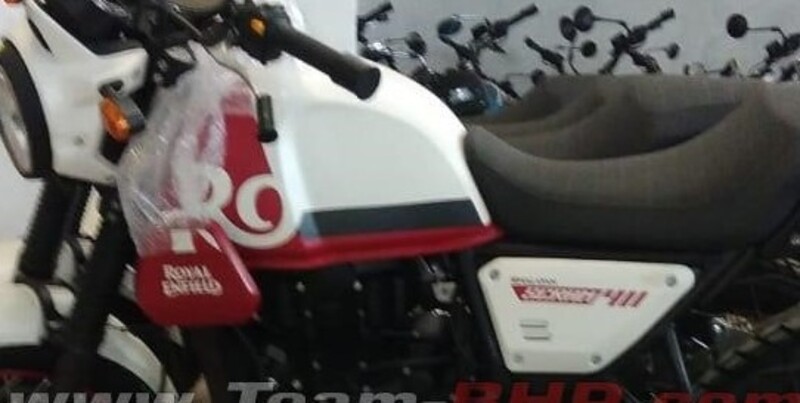 Royal Enfield Scram spy pics completely reveal the upcoming motorcycle along with many other details. Does it make a case..?

Royal Enfield and its test mules is what everyone has been talking about nowadays. With as many as 4-6 test-bikes under tests RE is keen on fighting out the new competition from Classic Legends, Honda and others.

Adding to the norm, today, thanks to an online forum, very interesting images and information has come to light.

First of all, we have now received confirmation on the name of the new Scrambler, based on the Himalayan. It will be called as Royal Enfield ‘Himalayan Scram 411’. That means that the maker has made Himalayan as a sub-brand which may spawn many other motorcycles under it.

The Scram 411 has been busted completely in this new image set. This will make it the second Scrambler offering from an Indian manufacturer.

The bigger news is that the motorcycle has been snapped at some dealership which means the final model has been frozen and dispatches to dealerships have commenced.

Another highlighting feature that jumps out is that the Scram 411 is sporting dual-purpose tyres. This indicates that it may carry forward some of the off-road DNA of the Himalayan.

Other than these new details, a lot has been revealed about the Scrambler from the Royal Enfield stables. You can read our latest coverage here.

It is common knowledge by now that the Himalayan Scram 411 has a lot of elements similar to its older ADV sibling and will also utilise the same heart that powers the ADV.

The Scrambler will be powered by the familiar 411cc, single-cylinder, air-cooled, SOHC engine that puts out 24.3 BHP and 32 Nm of torque on the Himalayan. What tuning changes has it received in the new application are yet to be ascertained.

The RE Himalayan Scram 411 will directly compete with the latest Yezdi offering – Yezdi Scrambler.

Since the bikes are reaching dealerships, we expect it to be the next launch from the company and it may be introduced soon. We are expecting the Scram 411 to be priced Rs 15,000 – 20,000/- lower than the Himalayan – which means we may be looking at a price tag of around Rs. 1.90-1.95 Lakh (ex-showroom).