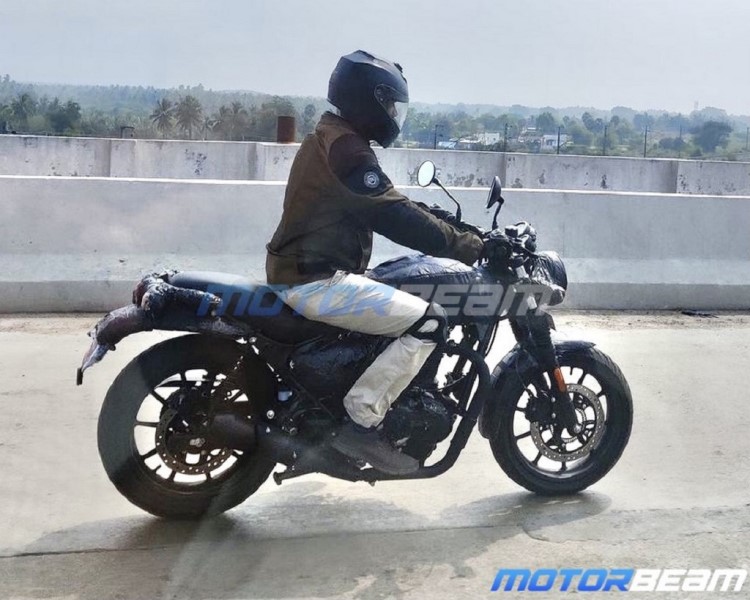 Royal Enfield Hunter looks like no other model in the company’s line-up. It could be one of the entry model in the portfolio when launched…

This Royal Enfield motorcycle looks like no other RE motorcycle that is currently on sale in the country.

After many makers declared war against Royal Enfield, the Chennai based motorcycle maker is on its toes. It is developing many motorcycles and one of them will probably be called as Hunter (based on the names the company has filed patents for). It has been spotted testing again, this time on the Chennai-Salem highway in Tamil Nadu.

The model looks close to being production-ready, and is expected to be launched sometime this year. Visually, the motorcycle looks like no other Royal Enfield that is currently on sale here.

It has resemblance with Triumph Street Twin. Hunter (if it will be called by this name) gets alloy wheels, disc brakes both at the front and rear, blacked out engine and exhaust, a circular headlamp and tail-light, teardrop shaped fuel tank, and a long seat.

The new bike is expected to share its engine with the recently launched Meteor 350, apart from the same (or similar) twin-pod instrument cluster. These pods are expected to come with tripper navigation system, which will also debut on the 2021 Himalayan.

The Chennai-based company has several products in its pipeline, including the upcoming next-gen Classic 350. These motorcycles are expected to share most of their components with each other, to keep development costs down.