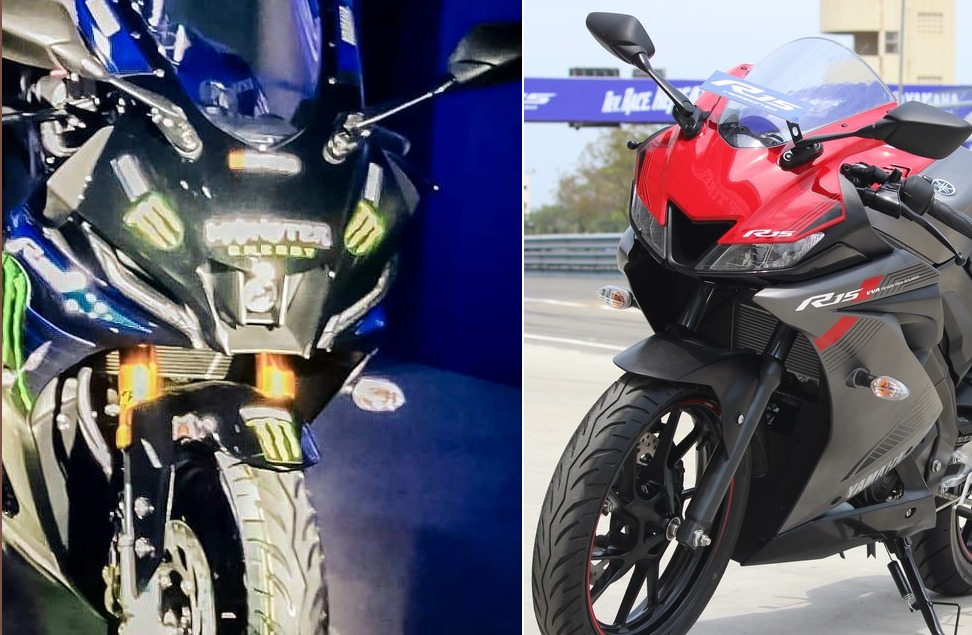 R15M vs R15 v3 – We list the three big changes that have been revealed from the busting of the M model.

It was leaked that a model under the name of R15M is under works just yesterday. And today we have its first pic. Though the image has not been clicked from a proper angle, it does highlight at least three BIG changes that the motorcycle will get as compared to the existing R15 v3.

STYLING – The version 3 R15 comes with a twin LED split headlamp design that looks real good. The R15M is getting a completely new face that is reminiscent of the R7. It comes with a centrally located single projector headlamp and has twin DRLs on the sides. Like the FZ-X there is no protective glass for the headlamp.

SUSPENSION – Indonesia received the R15 v3 with upside down front forks before India. For our market, the V3 was launched with lesser features, including conventional telescopic front shock absorbers. That time clearly Yamaha believed that, with USDs, the price will escalate to levels that may threaten loss of sales.

The 2022 R15M is now coming with golden colored upside down front forks and in all probability, it will start its journey from here and then go to other markets. So all you people who complained about the lack of USDs on the R15, here they are – get ready to pay more for them!

POWER – According to the type approval document that was revealed yesterday, power of the new model (R15M) has been reduced to 18.35 PS which is 0.25 PS lower as compared to the already detuned R15 V3 BS6 (more details).

Not that this is a significant drop but the reason of a power change is not clear. This is all the more confusing considering the fact that Yamaha will definitely promote this model as a sportier offering – like it is the case for its other ‘M’ models.

The R15M is also claimed to get a new instrument cluster with Bluetooth connectivity but since we do not have a pic and/or details we haven’t added it in this list of differences.

According to reports, pic of the R15M has surfaced from its dealer showcase event. This means that the motorcycle is absolutely ready and it just needs a date of launch – which can arrive anytime in the coming few days or weeks.