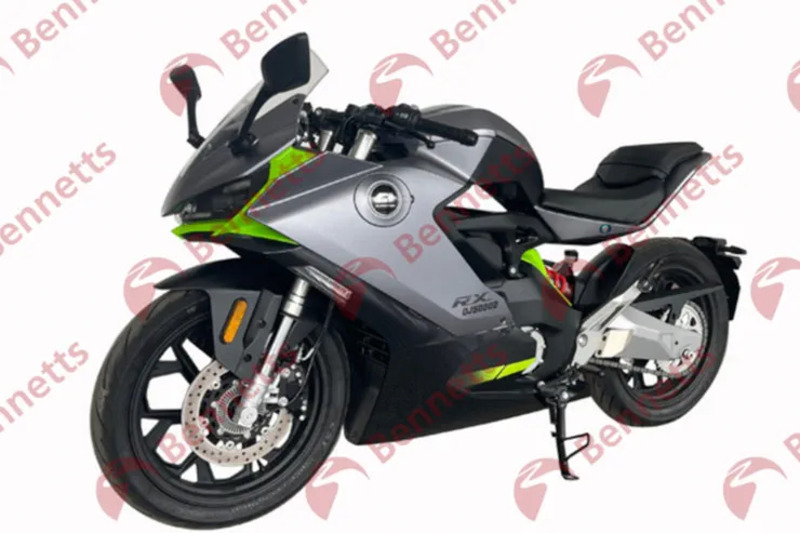 It appears everyone is gearing up to roll out their electric two-wheeler competitor into the global market.

This time the Chinese two-wheeler manufacturer – QJ Motor – have received approval for ‘RX’ name for their upcoming first electric sportbike. This bike is based on the ‘QJ7000D’ concept which was showcased back in 2021, and is well on its way to enter production soon.

The QJ Motor RX electric bike, after receiving approval for the name, is ready to enter production with some significant changes to be road legal. Overall the design of the bike has received a sportier overhaul.

The front of the bike is now sharper with aggressive lines compared to the concept model. The full fairing has also become angular adding to the sporty aesthetics of the electric bike. The flip-out charging cover for the charging port, showcased on the concept model, has been retained on the production model.

The design update extends to the rear of the bike as well. Compared to the concept QJ7000D model, the seat is still a stepped two-piece unit, but the design is sharper with raised tail-section and is equipped with the seat-lock. The ‘fuel-tank’, showcased in the concept to have ample storage under it, is likely to be retained on the production model.

Moving ahead, the approval document reveals that the QJ Motor RX is going to run a 5 kW (6.7 BHP) motor instead of the 7 kW (9.4 BHP) motor shown on the concept model. Positive news is that the top-speed remains untouched and will be 65 km/h claimed. This is because, according to the company, the RX electric bike is modeled to be a  125cc-equivalent electric motorcycle.

Since QJ motor and Benelli are owned by the same parent company – QianJiang Group – it is safe to expect that after the RX is introduced we can see a slightly modified and re-badged electric sports bike from Benelli.