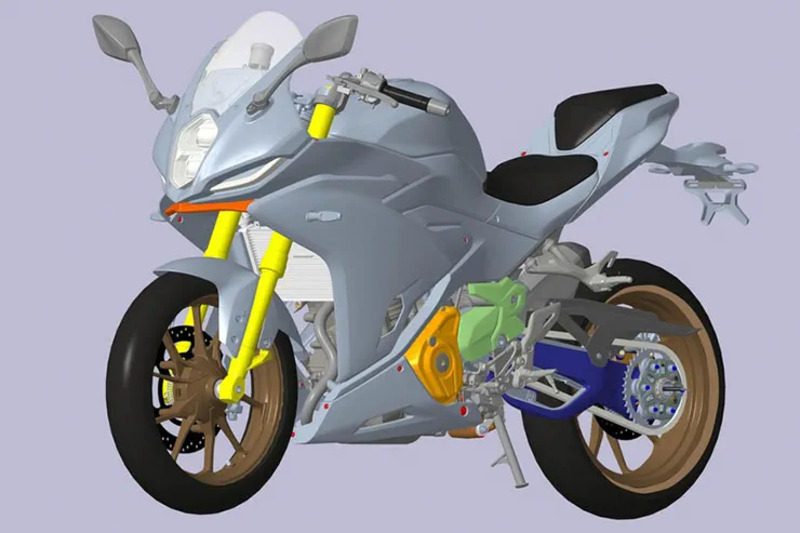 So, for a while now, there have been many reports which tell us that Benelli is working hard on reviving their ‘Tornado’ range of supersport bikes. They are expected to bring two models featuring a 550 cc parallel-twin and a 650 cc four-cylinder engine.

However, a new patent document and images from the document have leaked showing that the Chinese-owned Italian brand is working on a supersport model powered by a 399 cc parallel-twin engine named – ‘Benelli Tornado 402R’.

Looking at the images from the patent documents, the resemblance to the Tornado 302R is unmissable. The full-fairing, stacked headlight, the DRLs strips, the rear-view mirrors all are reminiscent of the smaller 302R model.

Looking at the overall design of the bike, it retains the design and style of the Tornado family. The cues like big & muscular fuel-tank, the split-style seating, the raised tail-section, the unique alloy design all are in line with the traditional Tornado design language.

Chassis consists of USD forks at the front coupled with a mono-shock fitted to a single-sided swingarm at the rear. The braking is handled by a single-disc setup at the front and the rear and will be aided by ABS as standard.

Also read: Keeway Might Bring A Maxi-Scooter Alongside The Cruiser On May 17

The engine is the most interesting aspect of the upcoming supersport motorcycle. It is strongly rumoured that the 399 cc engine is heavily inspired by the Kawasaki unit that powers the current Ninja 400 and Z400 models.

Since it is very similar to the Kawasaki unit, it is safe to assume that the performance numbers will also be very similar as well. It is expected that the 399 cc parallel-twin engine will be producing around 45 HP and 38 Nm of torque. However, we expect that the Italian brand will be working and improving the output of the engine and therefore, these numbers could easily be very different from the ones assumed.

Other than these, there is no further information regarding the launch and availability of Tornado 402R. We expect the bike to go into production in 2023 and might launch in 2023-end or early-2024.