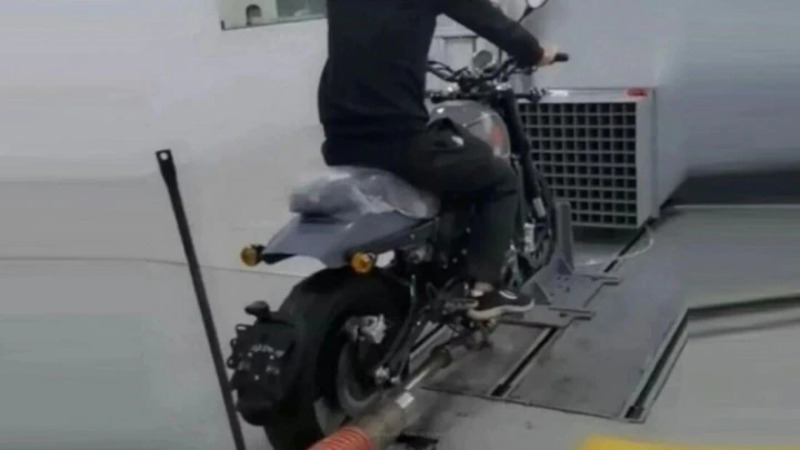 So, we have been hearing for some time that Harley-Davidson have been planning to expand their reach to more and newer markets. And to succeed in this plan of theirs they have been working to add new and suitable products to their line-up.

One of their partnerships in Asia, other than our very own Hero MotoCorp, is with Qianjiang Group (QJ Motors) who are owners of the Italian brand Benelli.

In the latest sneak-peek into their upcoming models, images of a Roadster motorcycle, very similar to Benelli Leoncino 500, have been spotted being dyno tested.

The bike being tested can be seen very clearly carrying the Harley-Davidson emblem without the name confirming that the bike indeed is being tested for the HD.

These images have been captured from a video which was posted by QJ Motors. So it is safe to say and hence, confirm, that QJ Motors is assisting the Milwaukee based company to create new motorcycles which will help them enter new Asian markets.

As iterated before, the new Harley-Davidson 500 cc Roadster bike will be based on the Benelli’s Leoncino 500 which is already available in our country. It will be powered by its 500 cc, parallel-twin, liquid-cooled engine which produces 47.5 HP and 46 Nm of torque. If HD do consider bringing the Roadster to the European market, they might tweak the performance of the bike to comply with the A2 licensing norms.

The chassis elements will be similar as well, consisting of a Trellis frame, USD forks in the front and monoshock at the rear. The braking setup could see an update. The current combination of 320 mm discs at the front and 260 mm at the rear could be controlled by Brembo or ByBre calipers on the H-D motorcycle.

It is expected that the new Harley-Davidson Roadster based on the Leoncino 500 could enter our market later next year. Having Hero MotorCorp handling their sales and distribution in our country, it will be so much easier for H-D to bring their new products here. The new 500 cc Roadster could be priced around Rs. 4 Lakh (ex-showroom) when launched.