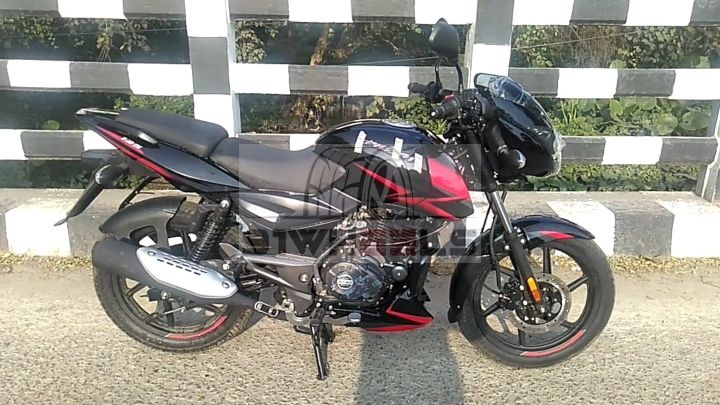 Pulsar 125 split seat spied at a dealership in a new state; Fair bit of chances that Bajaj is expanding its availability pan India..

When the Pulsar 125 was launched, there wasn’t a lot of price difference in the Neon edition of the 125 and the 150. However, with prices going senselessly high because of the various regulations, the gap between these models has increased. After the recent price hike, Pulsar 125 Neon costs Rs 70,995 whereas the Pulsar 150 Neon which is the entry model in the 150 range, costs Rs 90,003 (ex-Delhi). That is a big gap of almost Rs 20,000.

This, naturally, allows Bajaj to bring in another model in between. And what better than the Pulsar 125 in a slightly premium avatar. In comes the Pulsar 125 split seat into the scene. The Pulsar 125 Split seat was on sale even in Bharat Stage 4 times but it was limited to few cities/states.

In a latest, new pics of the Pulsar 125 split seat have surfaced on the internet with claims of it being the Bharat Stage 6 model. The more interesting bit about these pics is that they are snapped at some dealership in Bihar. This means that Bajaj is already dispatching the motorcycle to dealerships and it is caught in a new state – ample hints that it may go pan-India as well.

As compared to the Neon model, the premium variant gets split seats, split grab rails, clip-on handlebars for added sportiness. In addition, it is also equipped with tank extensions and underbelly cowl which even the 125 Neon was updated with recently. It is expected to be powered by the same engine without any spec changes.

BREAKING: Bajaj Beats Hero in Total Sales in May 2020

It has been priced reportedly at Rs 78,643 ex-showroom in Bihar which still makes it significantly cheaper than the next offering in the lineup – the Pulsar 150 Neon!