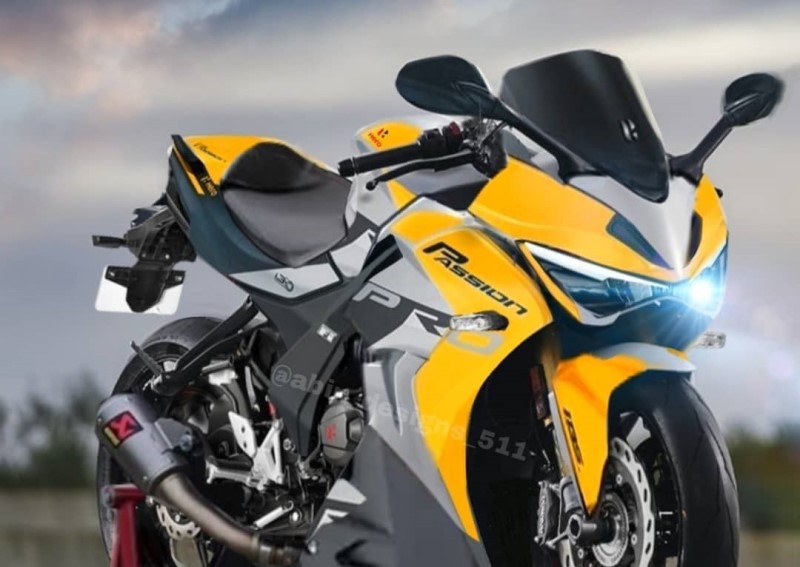 This Passion Pro 400R will never make it to production and it is just an artist’s dream but such a motorcycle under a different moniker will be cool..

A digital artist who has been tweaking existing motorcycles into beautiful machines, Abin Designs, has rendered a new concept model from Hero MotoCorp.

Abin has created a supersport version of the humble Passion Pro and he is calling it as Passion Pro 400R concept. He jokingly wrote –  I know I have to face some ridicule, but these two pics of his imagination have combined 14,000 likes.

And frankly, it looks simply brilliant. His concept version carries over the existing dual color theme of grey and yellow onto the imagined model. It is equipped with sharp looking ‘aggressive’ twin headlamps which appear to be inspired from Ducatis; full fairing, chunky mudguards and golden colored upside down front forks.

The motorcycle is shod with a short Akrapovic exhaust (in one of the pic) and slick tyres, along with a rear monoshock. There is no pillion seat or it is covered with a plastic cover. The humped fuel tank and the flowing seat completes the deal!

Now, everybody knows that this is just a wild imagination and Hero will never launch such a Passion variant ever. However, Hero is indeed looking at premium motorcycles and this is a ray of hope for us – that we get to see some exciting models from the company. Last year it showed a near 300cc Adventure motorcycle which will come with may Firsts. Recently, it confirmed that it is making a mid-sizer with Harley Davidson, which will go against Royal Enfield (details).

And we shall also not forget the futuristic concepts Hero shared multiple times in the last few Auto Expos.