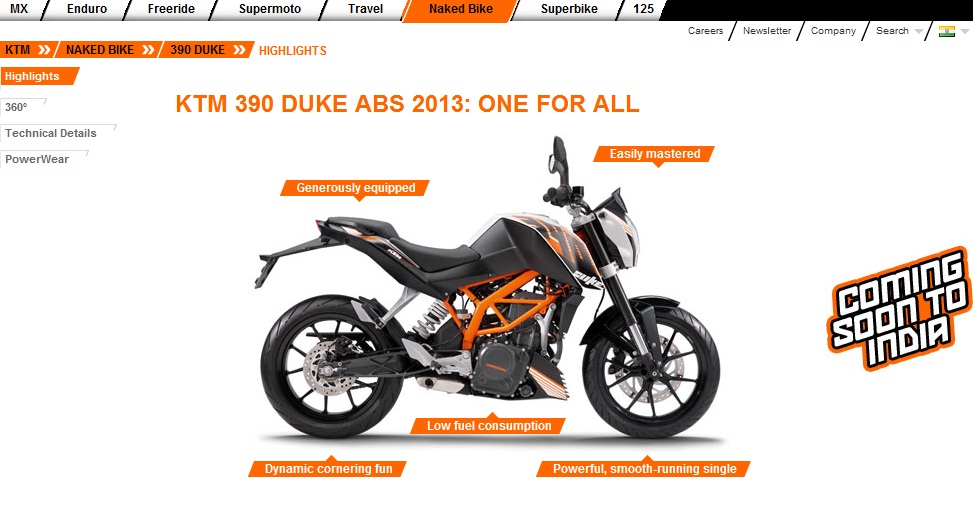 If you are one of those very eagerly waiting for the next BIG thing in India, we have some more dope for you. The upcoming next wave of naked performance biking is coming to India soon. And the name we know is 2013 KTM Duke 390!

Just move over to KTM’s official site and you would be greeted by a prominent “Coming Soon to India” ticker at 2013 KTM 390 Duke’s page. These are probably the first official words about the bike coming on our land. According to our sources, Bajaj might launch the bigger KTM here in India somewhere around March next year. Similar to Duke 200, Duke 390 would also be manufactured at Bajaj’s Chakan plant.

KTM Duke 390 would be based on the existing KTM Duke 200 and there would be heavy sharing of parts to save on costs. It is powered by a 373.2cc single cylinder 4 stroke liquid cooled engine which produces adrenalin pumping power output of 44hp and a torque output of 35Nm. Another significant inclusion would be the Anti Lock Braking (ABS) system which has been long longed for on Indian bikes.

Though, we do not have any concrete clues about the pricing of the bike right now, but we do expect a pretty competitive price sticker to this bike considering the heavy localization and parts sharing it would be subjected to. So, would you like to pay Rs 2 Lac for this menace?