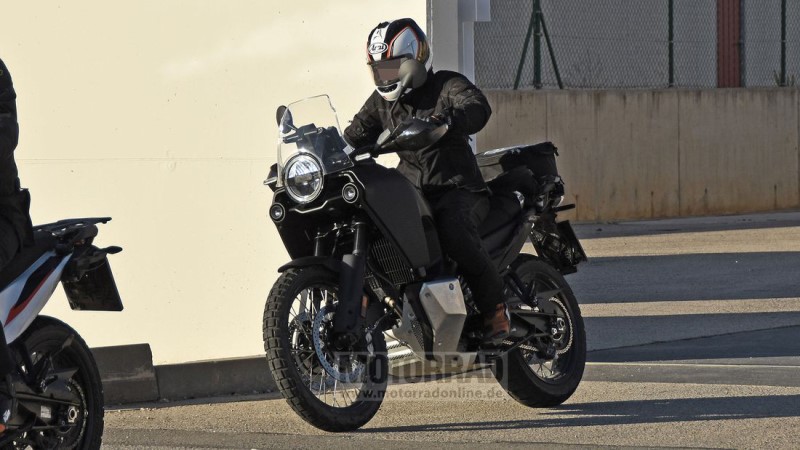 With the newly acquired Swedish brand Husqvarna, KTM has some serious plans to venture into and do doubly good in many segments. Husqvarna has already been launched in various countries including India and it is doing fairly good.

However, till now, Husqvarna only has single cylinder, entry level models in the roadster domain. It showcased a very simple, but brilliant looking Norden 901 adventure concept at the last EICMA. The unveil was followed by a confirmation that the ADV will go into production, but no timelines were discussed.

Looks like, we have some movement in this sphere as the production version of the motorcycle has been spotted road testing. Like its revealed pic from the investor presentation suggested, the production spec model is very close to the concept – which is great news.

SPIED: Is This Husqvarna’s Svartpilen 200 Under Test…?

Along with that round headlamp and semi fairing, the Norden 901 has a simple silhouette and rides on 21 inch tyres at the front and 18 inchers at the rear. The chunky USDs appear to be WP sourced. The Norden will be powered by the 899cc parallel twin cylinder engine from the 890 Duke that is good for a power output of around 120 bhp.

SPIED: Days Ahead of Launch Husqvarna 401 Spotted Testing in India

Though Motorrad says that the model is coming by end 2021 or early 2022, we are hopeful of an earlier introduction considering that it has been long time since the company showcased it first. Let’s hope we get to see it sooner, and in India, as well!