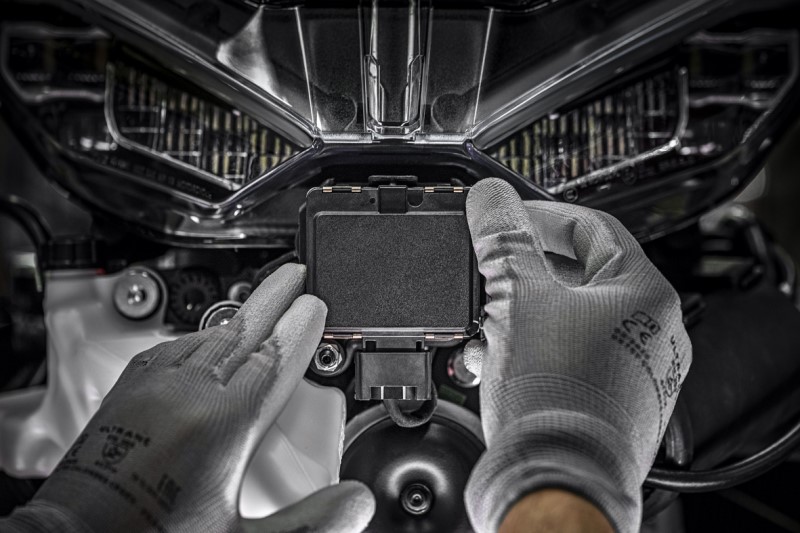 The Next-Generation Multistrada V4 launch on November 4th; it will feature a new light-weight four-cylinder engine details of which will be revealed soon…

The Italian automotive manufacturer – Ducati Motor Holding has just announced that it has started producing the world’s first motorcycle with front & rear radar technology, at its plant in Bologna. It is talking about the fourth generation Ducati Multistrada V4.

The Multistrada range of motorcycles have been one of Ducati’s most successful bikes, and the company informs that it has produced over 110,000 units of them across its four generations.

The new Multistrada V4 is equipped with radars at the front and rear. A radar (pictured below) is an advanced aid system that supports and makes riding more comfortable, as it reconstructs the reality surrounding the motorcycle. The technology has been developed in close association with Bosch.

This technology makes its debut on Ducati motorcycles with the Multistrada, and will soon come equipped on company’s other motorcycles.

The radars weigh only 190 grams each, and the front radar controls the action of adaptive cruise control (ACC) and adjusts the distance from other vehicles by controlled braking and acceleration. This action comes into play when ridden at a speed between 30 and 160 km/h.

On the other hand, the radar placed at the rear of the motorcycle detects and reports other vehicles positioned in the blind-spot (the area not visible to the rider in the rear-view mirror).

It will come with a new light-weight V4 engine that, Ducati says, has been designed and developed for maximum smoothness and extended maintenance intervals. More details of the engine will be revealed by the company on October 15th.