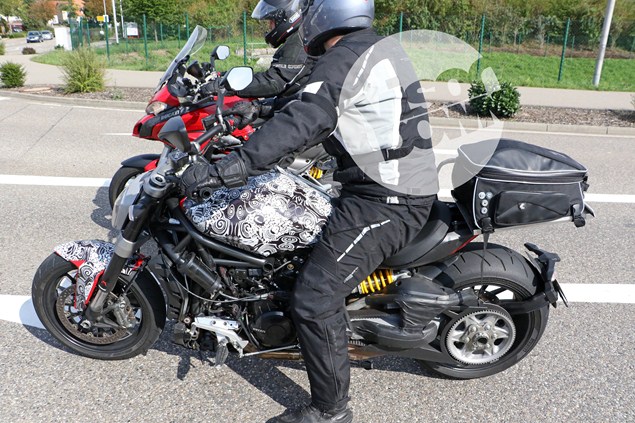 New Spyshot confirms Ducati is snatching the ‘Sports Cruiser’ tag from the motorcycle. We are not sure why….!

The current Ducati Diavel is a monster of a machine and sits right at the pinnacle of the ‘Sports Cruisers’ available in the world! However, all that is going to change as Ducati is snatching the ‘Sports’ moniker from the motorcycle and it will become a traditional cruiser, tons of which are already available all around us…

A new spy shot of the second generation model has been put up by VisorDown which almost confirms our fears will go true!

The butch looks of the present-generation are not to be seen which are in abundance at the moment! This is a lot leaner design. The belt drive is visible which confirms one thing – expect some significant tweaks to the engine or probably a new engine altogether!

The flatter fuel tank has also lost some height and also appears to smaller and slimmer than the present version. The saddest change are those front-set foot pegs which will lend the new Diavel the traditional cruiser riding posture.

The new Diavel also gets a revised swingarm which in the test unit is seen to be covered with sellotape. The rear mono suspension unit has moved up and the yellow springs this time are more prominently visible. If you zoom in to the front fork you can clearly see a Marzocchi logo which is interesting actually. Yes the current version also carries a 50 mm upside down Marzocchi unit upfront but the brand is being shut down by the end of this year!

At this moment, we are not very sure of what Ducati’s thought process is, behind this dramatic change to the image of the fine motorcycle. Expect the new Diavel Cruiser to be officially unveiled at EICMA later this year.