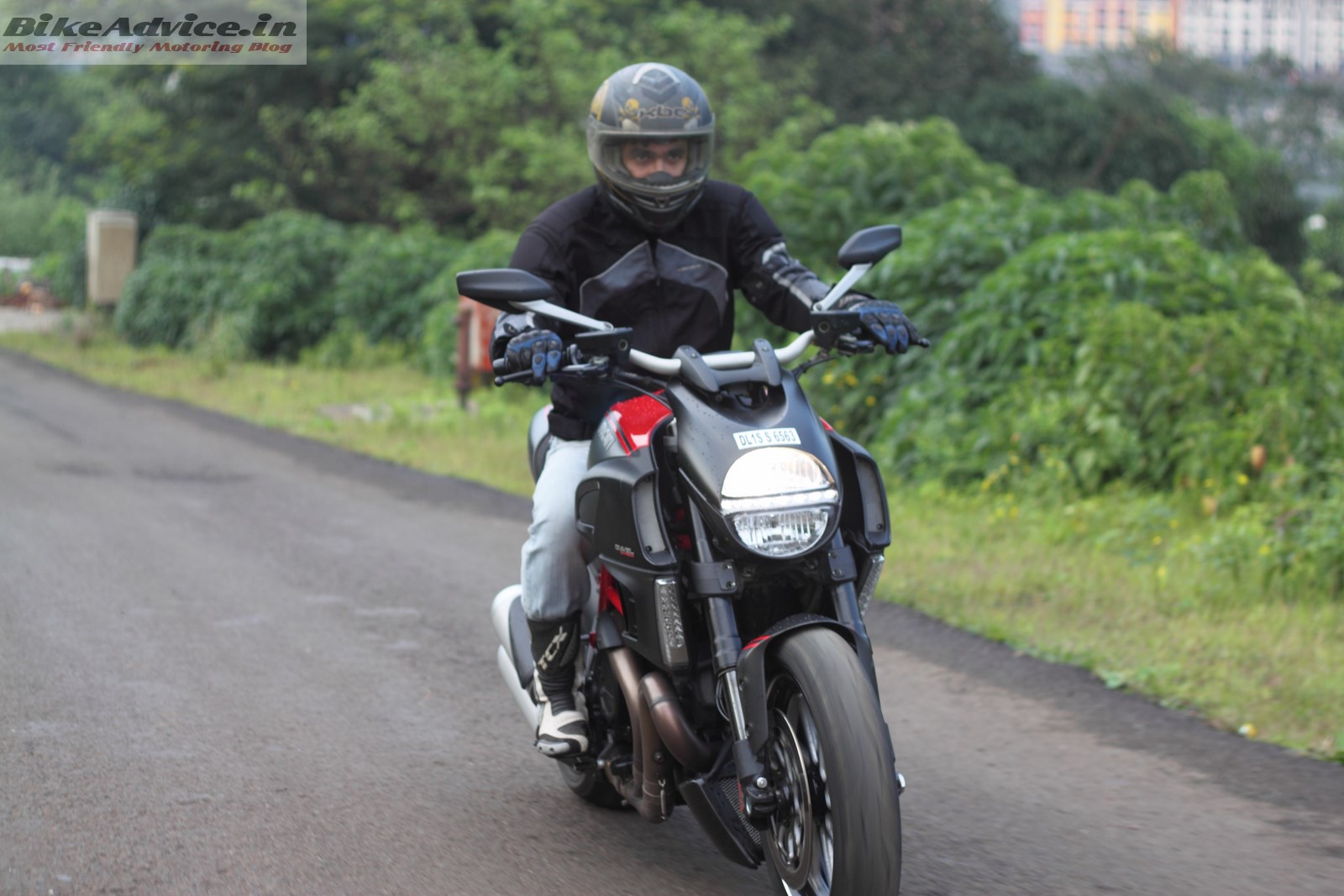 Even as an automotive journalist it’s not every day that you get to ride a near 30-lakh-rupee motorcycle, so when the opportunity came I was more nervous than excited. Nervous, not about dropping the bike but purely about one thing – will this bike live up to the hype and, more importantly, does it justify that price-tag? The former is something that this story will revolve around and by the end of it we should have the answer to the latter too, hopefully. 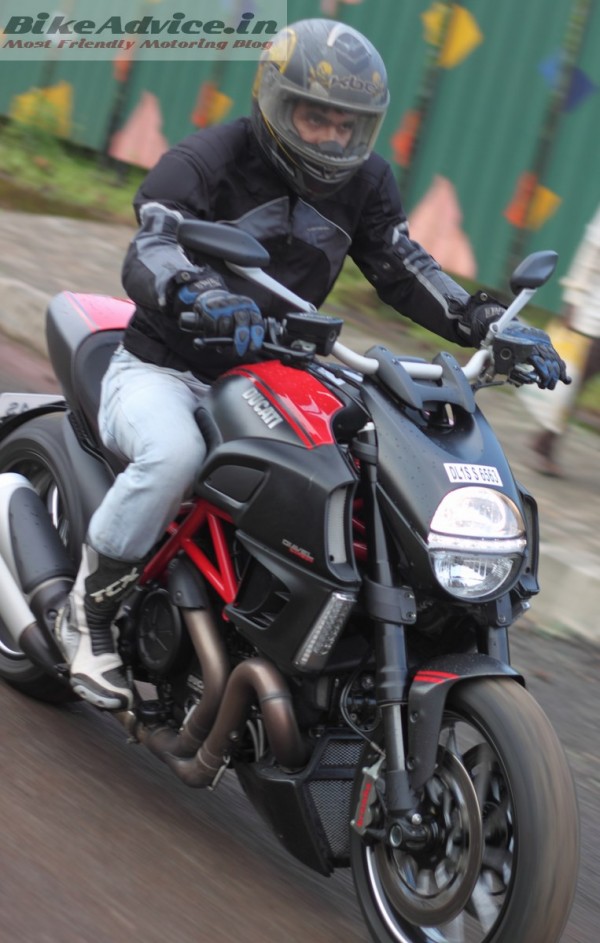 Now, I have come to a conclusion that God has been partial to the Italians when it comes to creating priceless works of art! Leonardo da Vinci, Michelangelo, and Caravaggio were Italians and so was Massimo Tamburini who designed two of the world’s most beautiful motorcycles ever – the Ducati 916 and the MV Agusta F4. Pierre Terblanche, a South African native, had the opportunity to work under him at Cagiva in his initial days in the world of motorcycle design. Terblanche went onto become the design chief at Ducati and it was under his leadership that the Diavel project began. 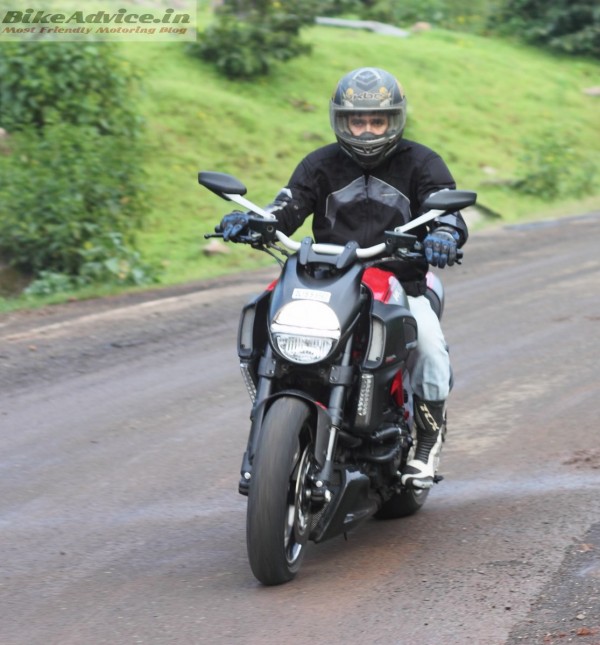 With that kind of influence you would expect everything to come out of the Bologna factory to be nothing less than gorgeous, right? But the Diavel turns out to be an antithesis to that expectation. The design is certainly intense, but pretty is one word that you won’t use to describe it. Make no mistake though as individualism can’t get better than this – you just won’t mistake it for anything else on the planet, and it’s absolutely menacing to look at! It’s a brawler, a bully, and has muscles to back that aggression too, but more on that later…

Once you have sized-up this intimidating Ducati and have somehow still convinced yourself of throwing a leg over it, you immediately realize, sitting upon that ‘friendly’ and comfortable low seat, that the name ‘Diavel’ could not be synonymous with ‘devil’ as is the popular belief. And it’s NOT – it’s a deliberate misspell by the Italian company of the correct Bolognese word ‘Dievel’. 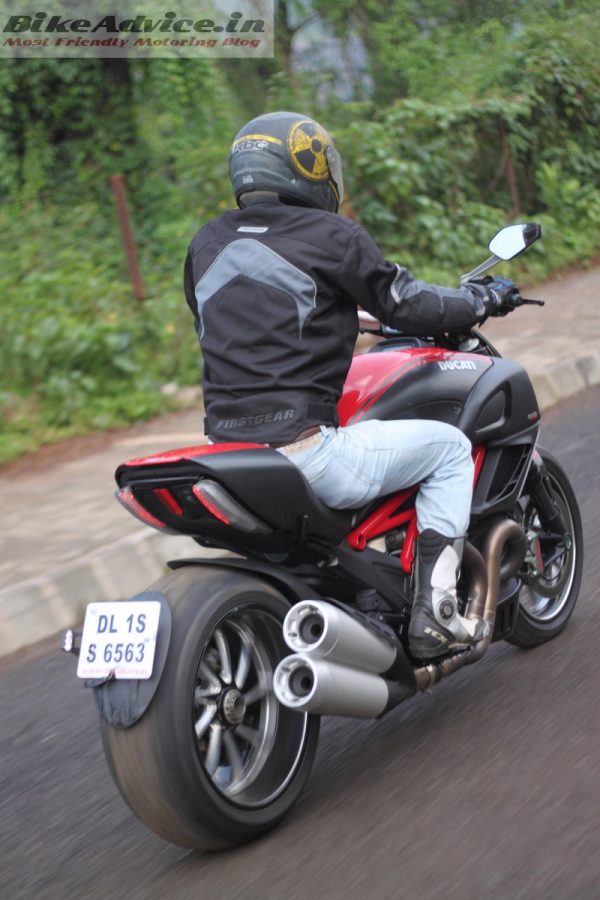 Anyway, with full gauntlets over your hands you again curse yourself for a moment to have not taken out the key before putting on the gloves. But it suddenly dawns on you that the official did tell you that the Diavel, like the Multistrada, comes with ‘keyless start’. So, with the key still in your pocket, you push down the engine-kill switch to its furthest position to switch the ignition on, flick it back up and thumb it to hear that L-twin growl.

And if you are forgetful enough to leave the key in your office drawer at the 15th floor, you can still start the bike by entering the preset pincode by using the toggle button mounted on the handlebar. That button is used to navigate through the menu in the all-digital dash display, which is mounted on the tank. The regular instrument panel is again an all-digital unit and is mounted unconventionally before the handlebars (onto the ‘bar risers) and not ahead of them. 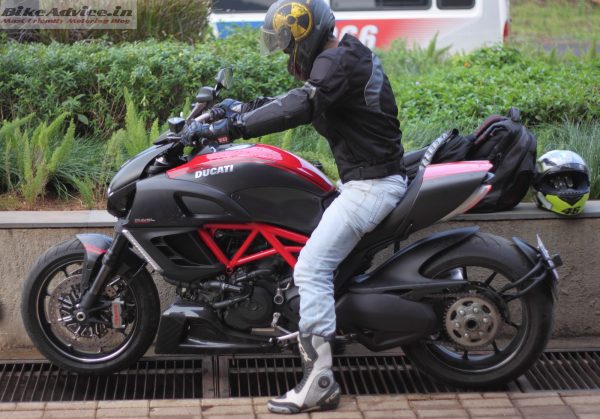 There are three riding modes on offer – Urban, Touring, and Sport. The first one caps the power at 100 bhp, and the traction control at level 5 out of the maximum 8 is the most active in this mode. Choose this one on weekdays, especially if the roads are wet, and you still will leave the traffic behind, I guarantee. The next two modes tell you that it’s a sportbike in the garb of a cruiser…

The 1198cc Testastretta engine of the Mutlistrada, derived from the 1198 sportbike, does duty in the Diavel too and produces 162 bhp in Touring and Sport modes where the traction control drops down to level 3 and level 1 (the lowest), respectively. The end result is a ferocious arm-pulling, whiplash-inducing 0-100 kmph run of 2.6 seconds – that’s Buggati Veyron territory folks. This Diavel earns a place in the fastest accelerating bikes in the world and the thing is even quicker to the ton than the Suzuki Hayabusa, Kawasaki Ninja ZX-14R, and BMW S 1000 RR! Of course, these around-200 bhp missiles will overtake the Ducati shortly thereafter, but egos would have been long damaged by then…! 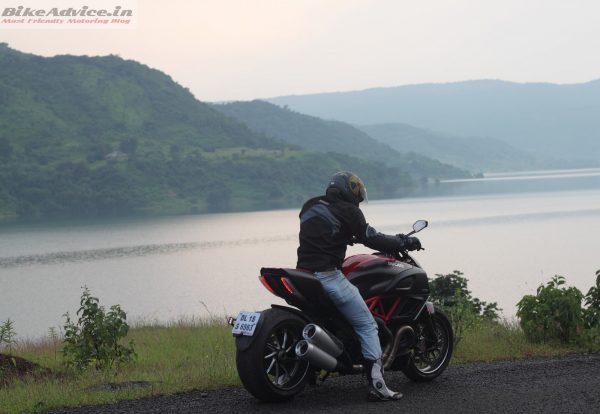 And you would be inflicting a similar kind of an insult while riding with your cruiser pals. And I am not, even for a moment, reflecting about the Diavel’s acceleration here. This bike will not only just keep up with the hypersports in a straight line but will also keep the litre-class brigade well in its sight on the twisties. That basically means that while you will play the considerate friend trundling along and soaking in sights with other cruisers on the highway, you will disappear the moment you start seeing curves ahead. I am talking about the tarmac here. The fully adjustable suspension and that humongous 240-section rear tire allow you to lean the bike as much as you would dare, leaving the onlookers in awe of your cornering prowess. You would know that it’s the bike that is making you look good but you won’t complain.

Another thing with cruisers is that you have to ‘plan’ your braking despite never really going that fast at the first place. The Diavel’s brakes are superbike-spec too – twin 320 mm discs at the front are summoned by 4-piston, radially-mounted Brembo Monobloc calipers while the 265 mm rear disc is caught on by a two-piston caliper, again by Brembo. Oh yes, ABS is standard on the Diavel.

This motorcycle was introduced in 2011 and has won many awards globally in its debut and following years. It did not actually need an upgrade but Ducati has recently added a host of changes to the 2015 bike that might not come to India until early next year. The most striking change on the outside is the full LED treatment given to the headlight, while new shorter and sharper silencers, a better-padded and new shape seat, revised radiator covers, and new ‘bar risers comprise some of the other visible changes. 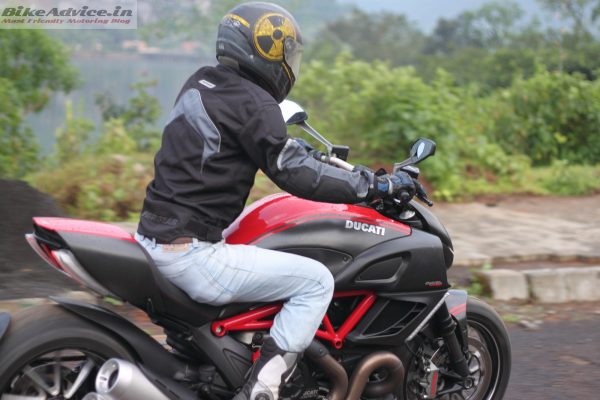 On the inside the compression ratio has been bumped up to 12.5:1 as compared to the current bike’s 11.5:1. The power output remains the same though it now peaks at 250 rpm less. The already colossal torque figure of 127.5 Nm has been increased by another 2.7 Nm though it still arrives at 8,000 rpm.

Ducati now seriously needs to get its act together in India as there are many owners who are still waiting for their bikes to be delivered despite having made the full payment eons ago. Moreover, with amazingly long service intervals the company really does not have to do much to instill confidence in current and potential owners of its motorcycles.

Still, the pathetic state of affairs at Ducati India is baffling to say the least, and most enthusiasts have taken the servicing of their Ducatis in their own hands. So, until the company gets its act straight and unless you are a DIY-type of motorcyclist, you are better off staying away from the Ducatis. However, once Audi, who owns Ducati, ensures that everything is in place, I would be first one to tell you that the Diavel’s prodigal 0-100 kmph time itself justifies its sticker price – everything else is just a bonus. 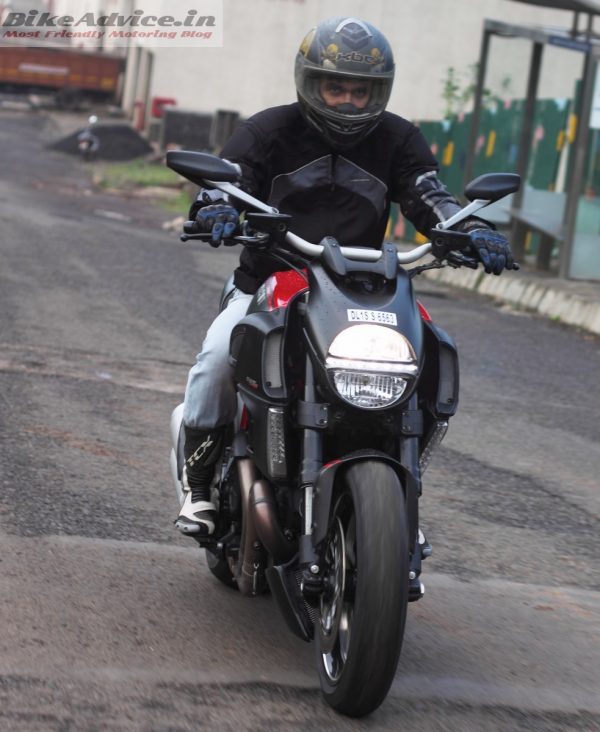 That frontal look, though not jazzy, is one of the most intimidating scene on your RVM, believe me!

This was the instance when I was looking out for the ‘key’ or ‘key slot’ 😀 . Also notice the low saddle height of the motorcycle.

Although, we couldn’t get a proper cornering shot, Diavel is, for a cruiser, fantastic at corners, something which you generally do not associate with cruisers per se! 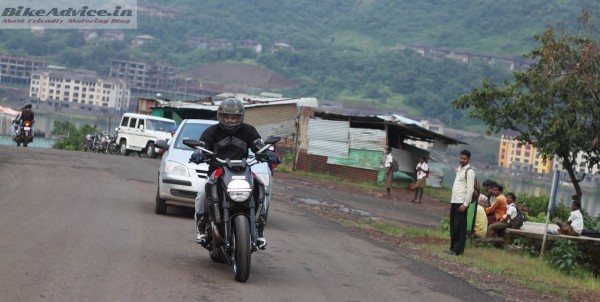 …And here is a pic for all of you interested in show off ;). Till a second back those two motorcyclists were also interested in knowing ‘what has just passed by!’ And that Getz owner was one chap among many who tried to follow me…  😀 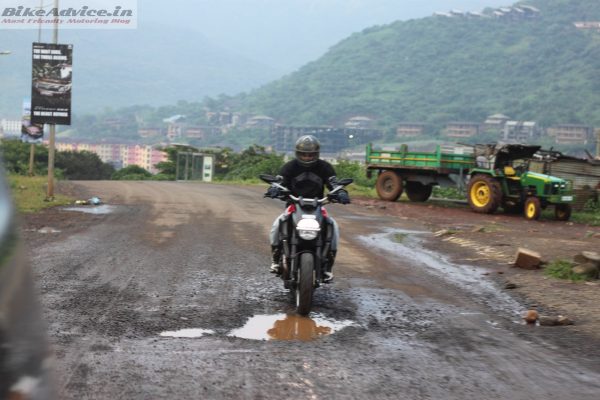 Not really an apt motorcycle if you are considering riding it on our everyday roads filled with potholes like this. It has a firm ride and hard set-up! For some reason, there was some noise from the rear everytime I hit a crater on this bike… 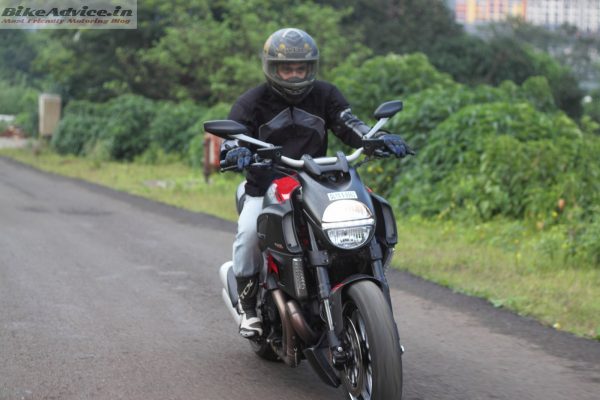 That headlamp is split into two different pieces with an LED center strip. Also notice the position of the side blinkers, its interesting… 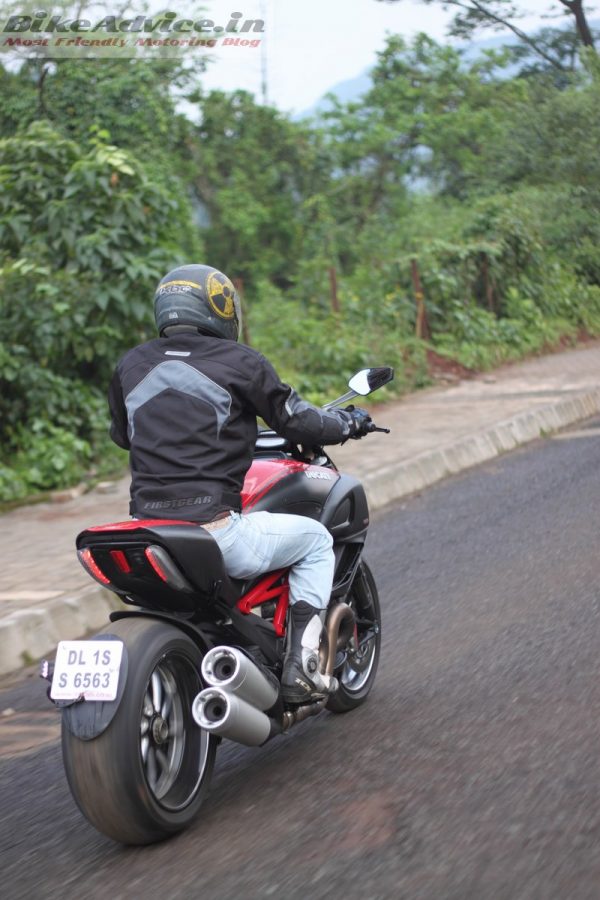 That single sided swingarm typical of Ducati, looks just awesome and those alloys magnificent! Rest of the beautification is taken care by that fat arse…tyre! 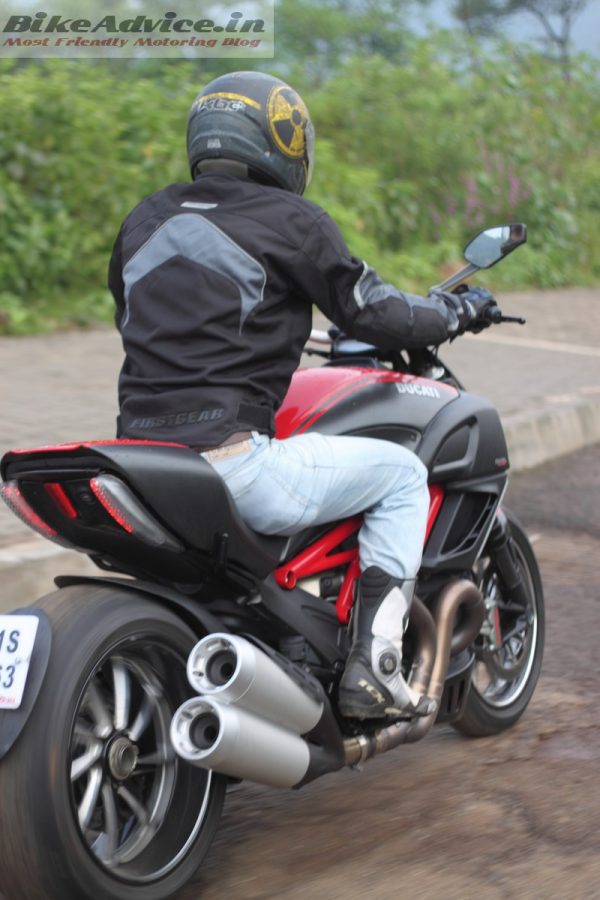 That two-mouth exhaust with that coating is possibly the only thing which, according to me, doesn’t gel with the bike. However, if you start looking at the origin and the whiplash of those copper colored pipes, you start loving them! The note is typical Ducati twin cylinder! 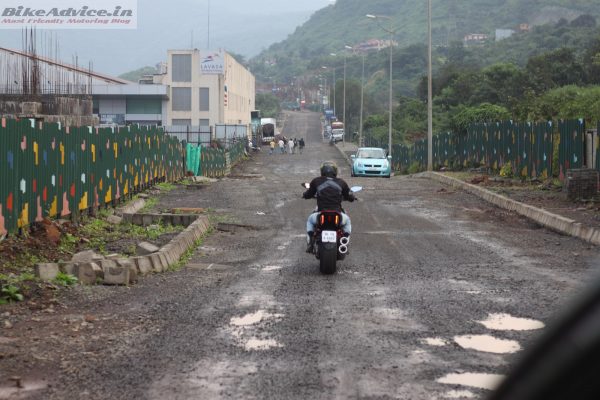 Check out a detailed ride gallery of Diavel Carbon here.