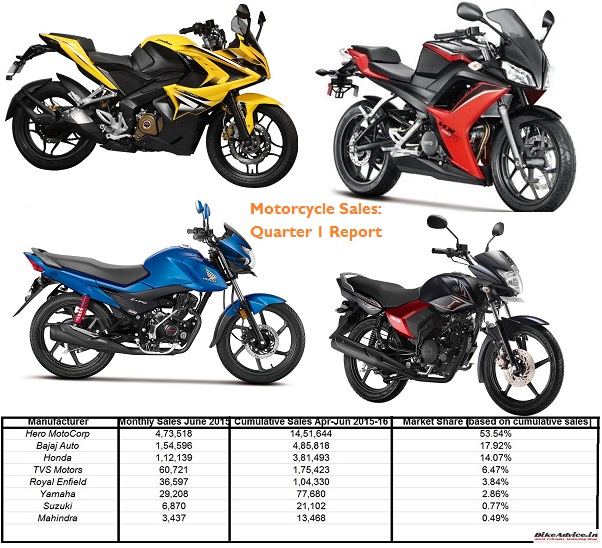 The Indian motorcycle market is perilously competitive where manufacturers have to brutally fight against each other for market share. Few years back, Bajaj was inching closer to Hero (Hero Honda then) and was only a few thousand units away but look at it now, the difference has increased by a massive margin. Bajaj, once a comfortable second, is now fighting for the spot against Honda as well…

With each manufacturer trying hard to climb over the other and eat into its market share, they have to keep refreshing their products to keep them alive and new in consumer’s eyes. This often leads to boring sticker updates and very minor design changes but things like these are unavoidable and that’s the reality of the market.

Today, let us present to you the first quarter motorcycle sales report for this financial year 2015-16 and see how are things moving with the top manufacturers…

Hero MotoCorp continues its supremacy with massive sales of 14,51,644 units and there is no second it seems! They have a mighty market share of over 50 percent but they also have a mightier problem: Most of their sales are from the entry level segment with displacements less than or equal to 110 cc. To give you an example almost 4.05 lakhs units out of 4.73 Lakhs in June 2015 were small capacity motorcycles.

In anything over the 125cc segment they are performing dismally with continuous fall in sales! You have to read this article of ours to understand the scenario. Their 150ccs have registered lowest sales in the segment far too often in the last few months. New Karizmas are official duds with two and three digit monthly sales! Add to that their HX250R has been delayed after EBR’s bankruptcy! 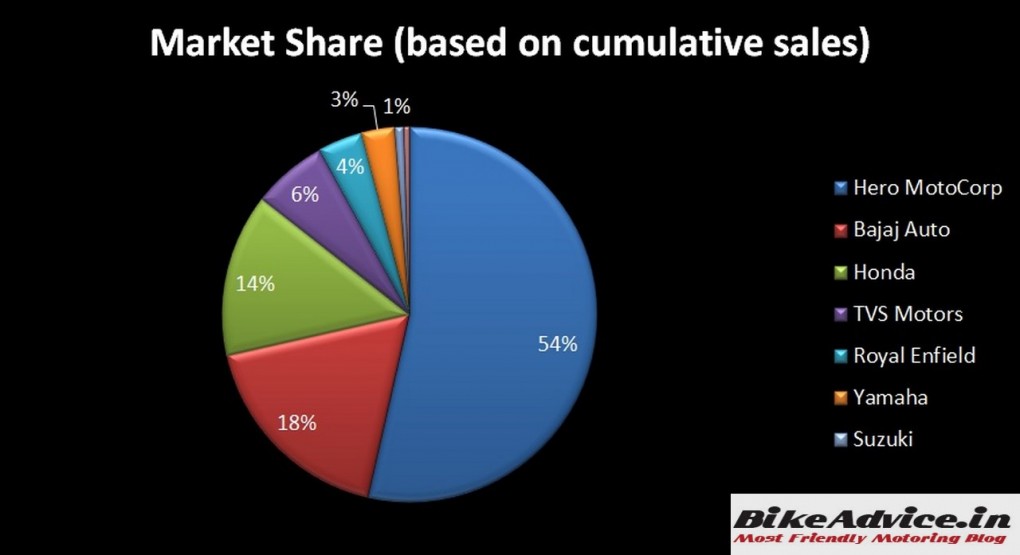 Traditional rival Bajaj has not only managed to secure its second spot but also distanced itself from the aggressive Honda! With a near 18 percent market share, Bajaj sold over 1 lakh more motorcycles than Honda in the first quarter of the financial year!

Their new Pulsars are doing well and the new entrants in the 100cc segment – CT100 and Platina ES are bringing them volumes. To make inroads into the 125cc segment where they have literally been kicked out, they have launched yet another Discover 125 and it remains to be seen if it clicks!

With the new Pulsar 150NS and two new brands planned, Bajaj does seem upbeat, however, it will be a very interesting battle in the times to come, against Honda, which is on a launch carnage!

Apart from this, Bajaj is focusing heavily on exports and the largest exporter of two-wheelers in the country shipped 1,32,986 units in June 2015 which is higher than the exports of all the other two-wheelers combined!

Honda may be the second largest two-wheeler seller in India thanks to its very strong scooter sales (read Activa), but they continue to play second fiddle to Bajaj in motorcycle-only sales! With total sales of 3.81 Lakh units in Q1, they are well ahead of TVS and are aggressively charging up against Bajaj and Hero.

However, they have NOT been able to pierce through the 100cc segment and their Dream series of motorcycles are just doing average business (more details). With the launch of the new Livo, they hope to do well. However, they are enjoying their stints in the 125 cc and 150 cc segments with Shine and Unicorn 160 respectively. They have a high-voltage event scheduled for 4th August, where we expect introduction of more new models.

TVS’ age old Apaches continue to chug along well with sales of over 22 thousand units in June. They have however lost some ground in the 100 cc & 125 cc entry segments on a year on year basis and expect 2015 Phoenix to do well. Apart from this, they are also working on reintroducing the Victor brand and new, bigger Apaches! Their motorcycle share stood at a little over 6 percent!

The success story of Royal Enfield is known to all. The manufacturer continues with its attractive growth surge and sold over 1 Lakh motorcycles last quarter. They are inching closer to TVS and this is commendable for a brand whose products start at over 1 Lakh rupees!

Following them is the duo of Japs – Yamaha and Suzuki. While Yamaha is busy defending its place, Suzuki has finally found out a winner in their line-up – the Gixxer twins! Mahindra has, so far, failed to impress and they are actually going downhill at the moment, but do have a few aces up their sleeves!

We will keep a tab on the monthly sales figures and will wait and see how things pan out in the current quarter.