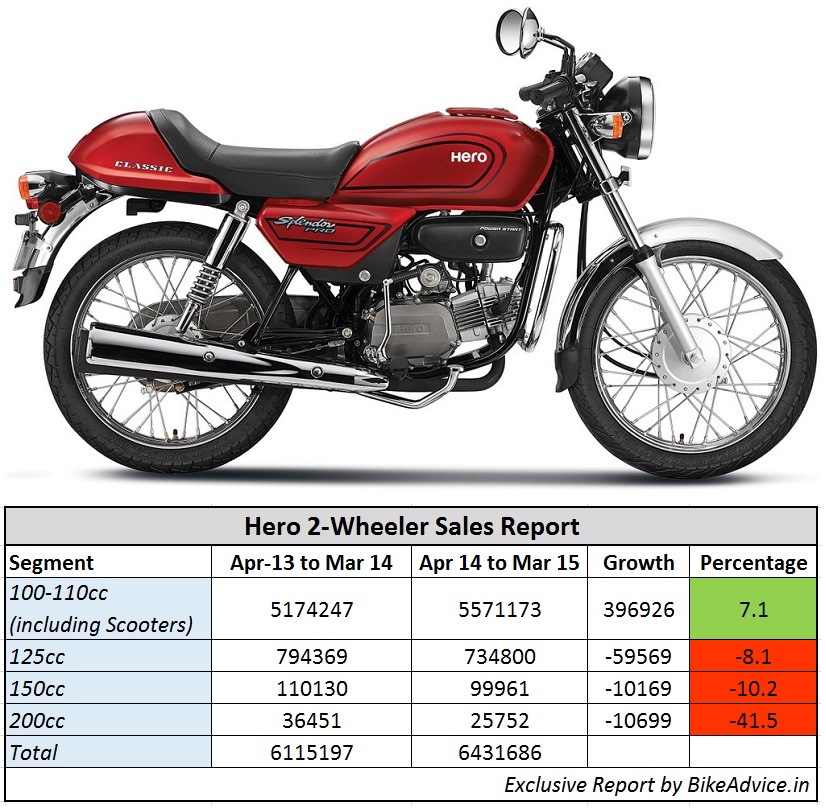 Note: All the figures are SIAM-sourced official numbers

We all know how things are skewed towards the 100cc for Hero MotoCorp, which is the world’s largest motorcycle seller in terms of volumes. But a big worry for the company is – their reducing share in anything which is greater than 100-110cc in terms of displacement. Let us tell you how are things going for this mass brand segmentwise…

Though they ended the overall year in green, but the ever increasing dependence on 100-110ccs may not go down very well in the longer run, specially when arch-rival Honda is attacking them in this very segment.

Further, the transition from current Honda’s engines to their (Hero’s) own indigenous ones is bound to take more customers away from them. And since the tag of ‘reliability’ needs to be re-initiated, it may take years for Hero to build the same rapport and image!

If we talk about April 2015, the first month of the new financial year, things have not really started well for the company. They registered sales fall in every segment, including 100-110ccs. The only green you see there for the >200cc motorcycles is possibly because they stopped production of the older Karizma twins and hence only double digit sales.

However, let us accept that its not easy when your technical partner for so many years, which did not allow you to set-up your own R&D, goes out. On the brighter side, Hero is preparing tons of products which also include some real exciting ones in the form of HX250R, Diesel RNT, Hastur and some regular new motorcycles and scooters. Hero is a cash-rich company and we know it will not fall down easily, but there will be a dip, for sure…