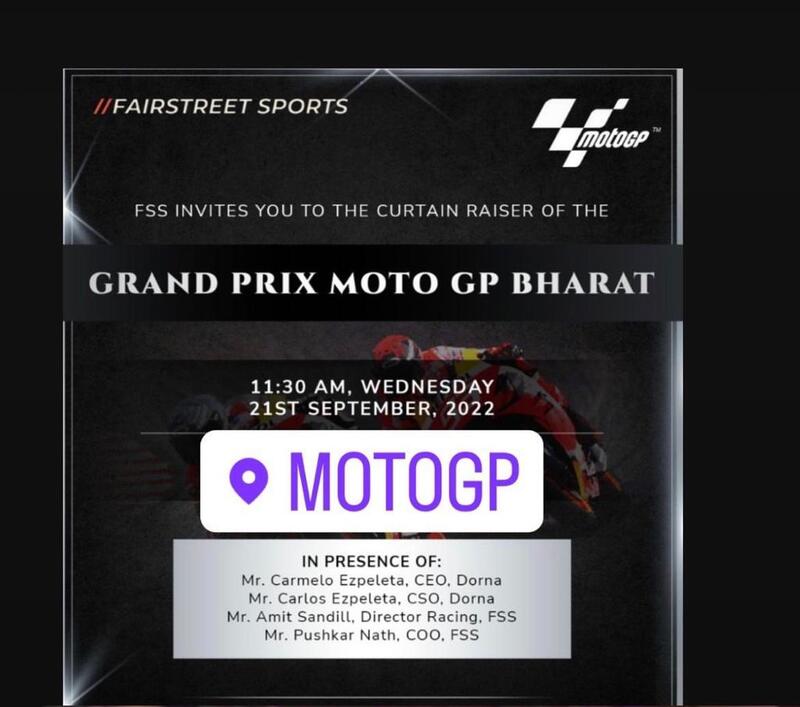 MotoGP race In India dream could become a reality really soon.. An announcement is expected this week…

Very good news for us MotoGP fans of India. MotoGP could be making its way to our shores as soon as next year.

As shared by an online news portal, the pinnacle of two-wheeler motorsport racing – MotoGP – is poised to include India as one of the international destinations of their high-action race weekend.

It is reported that the whole race weekend includes the Moto3, Moto2 and the prestigious MotoGP racing championship, which will be run on India’s premium racing track – Buddha International Circuit – situated in Greater Noida, Uttar Pradesh.

This information has also been confirmed by one of the members of the international sports media that exclusively covers the MotoGP – Mr. Simon Patterson – through his tweet a few days ago.

He has also confirmed the rumours that the new-gen MotoE (Electric bike racing) race could be run as soon as by end of 2022, but has pointed out that since the calendar for 2022 season is already confirmed, there is a smalll chance that it will happen.

Also read – What is MotoGP? Part-2 – The Weekend

Mr. Patterson has also advised us hyped-up Indian MotoGP fans that it is too early to get our hopes up. There is a high probability that the race weekend will happen at the Buddha International Circuit in 2024, with a low chance of it being included in the 2023 season.

The online portal has also shared that Mr. Carmelo Ezpeleta himself could make the announcement for the ‘BharatGP’ or IndianGP in this week or by next week. Mr. Ezpeleta is CEO of Dorna Motorsports which owns the commercial rights for all MotoGP events, worldwide.

The Buddha International Circuit is a world-class racing circuit which held Formula 1 (F1) races between 2012-2014. Initially designed for F1, the circuit should be undergoing many revisions according to the MotoGP requirements to better facilitate the monstrous bikes that are capable of hitting 352 km/h at full stretch.

Stay tuned guys… We will keep our eyes & ears open for all the updates.