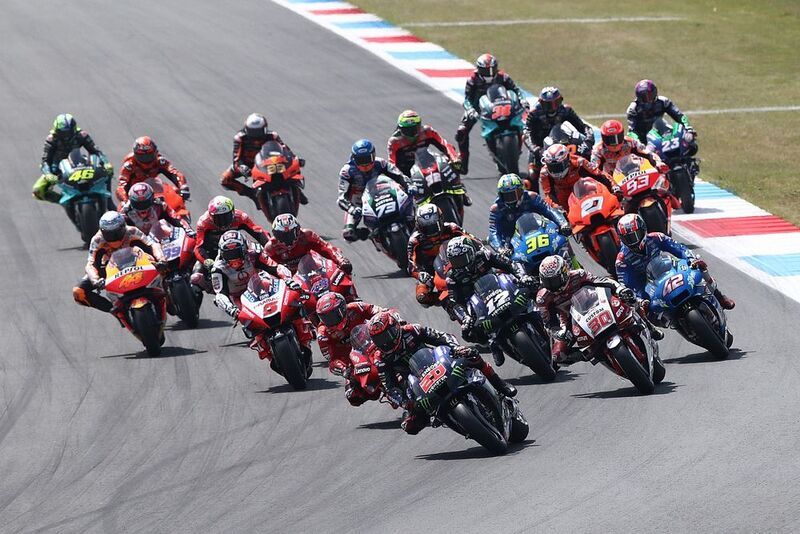 What happens before a MotoGP Race? We discuss the very interesting format that is followed in the build-up to the Race that happens on Sundays…

Welcome to the second part of our Introduction to MotoGP series.

In the previous article we covered what really is this phenomenon called MotoGP and all the basic knowledge needed to understand it.

Today, we are going to answer – how does the MotoGP race play out?? What all happens during the days leading up to the race? How do the riders know from where they should start the race? etc.!

The Season of the MotoGP starts with the first race, generally, taking place at Losail International Circuit in Doha, Qatar in the month of March every year.

There is a set format of Media Days, Free Practices, Qualifying and Race that is used since 2012 that makes up the The Weekend of the MotoGP.

Come Wednesday and Thursday, the riders start their weekend by fulfilling their media and contract obligations. Media obligations cover talking to sports journalists, giving interviews and answering questions pertaining to the past events and/or upcoming race and qualifying events.

The contract obligations cover attending the sponsors (Team and Riders both) events, their Team events, some social media Q&As, promotional activities etc. Basically, they try to promote themselves, their team/s and their sponsors on various media and social media platforms.

From Fridays, the real action begins.

Friday and part of Saturday are reserved for Free Practice sessions. As the name suggests, Free Practice sessions are practice time for the teams and riders. The riders and teams have free reign on the track to get used to the lay out of the track and setup their bikes (suspension, power-modes, engine-mapping, tyre choice, wheelbase, trail etc) most suitable to be as aggressive and as competitive as they can be for the next Qualifying and, the most important, Race.

There are four Free Practice sessions in total, aptly named FP1, FP2, FP3 and FP4. FP1, FP2 and FP3 are 45-minute sessions while the FP4 is a small 30-minute session held just before Qualifying. FP1 and FP2 take place on Friday while FP3 and FP4 are conducted on Saturday.

The FP1 and FP3 sessions are generally held during the first half of the day, while the FP2 and FP4 are held during the time around which the Qualifying and Race will take place. This allows the teams to better understand the conditions and how it influences their bikes’ performance during the two different time periods of the day.

The teams run both of their riders and bikes in these sessions to perfectly setup their bike, understand the conditions and layout of the track. While doing so, each rider sets a time on the board on which the rider gains a place on the leaderboard. The best times combined in the FP1, FP2 and FP3, by each rider, decide which Qualifying sessions will the rider run in. We will discuss this more, later.

The second most awaited event of the week is the Qualifying.

Qualifying decides which rider will start from which grid position for the Race that will occur the next day i.e. Sunday. There are 24 riders for the 2022 Season so there will be 24 grid positions.

Qualifying takes place 5-minutes after the FP4 ends. The Qualifying is divided into two sessions – Qualifying 1 (Q1) and Qualifying 2 (Q2). Q1 and Q2 are 15-minutes sessions each and are run in do-or-die format. That means when the time runs out, whichever position you are on the leaderboard, that is where you will start the Race the next day.

Which rider will run in which Qualifying session is finalised based on the FP1, FP2 and FP3 combined times. Top-10 riders with lowest combined times or are the fastest, directly qualify to appear in the Q2 session. Rest of the grids battle out in Q1, at the end of which the fastest two get to battle again in Q2 session against the fastest top-10.

The Q2 is an all out battle on its own. Now, Top-12 fastest riders of the weekend fight to start from the 1st grid position also called ‘Pole Position’. It is a one-lap ‘give-it-all’ battle to be the fastest and capture the Pole Position. One mistake and you could be down to 6th or 7th or maybe 10th position or even worse. Every tenth of a second counts. When the 15-minutes of Q2 are up, the one with the fastest time gets to be on the Pole Position for the Race.

The Race is what it is all about. The Millions of dollars, the months, even years of research & development, the decades of training & hard work, the sacrifices, the attention to details etc. it all comes down to the next 25-30 laps of the circuit.

During the first half of Sunday, the teams and the riders are allowed a 20-minute warm up session to understand the conditions and tyre choices for that day. After this, everything builds up to the final event.

At the time of the race start, all the riders make their way to the starting positions on the grid which they have earned the previous day. They leave the pits and are allowed one sighting lap after which they get to their assigned positions. After that, when the lights go Green, it is only the riders, their powerful machines, their rivals and their fight to the chequered flag.

In Part-3 of this Introduction to MotoGP series, we are going to introduce all the 12 Teams and the 24 Riders that are going to compete in the 2022 MotoGP Season.

The First Race of the Season which is known as Qatar GP is going to take place on 6th of March Evening at Losail International Circuit in Doha, Qatar.

Stay tuned for the Part-3 of this series and the first race of which we will be bringing the Race Report for you right here…..