BikeAdvice busted the first ever story of Mahindra’s 110cc scooter along with concrete spyshots way back in May this year. You can check them here. That time, the mule was wearing mismatched and incomplete parts. As a development to the same story, we shared another spotting of the Mahindra scooter in September which was better equipped and carried actual body parts, though hidden! 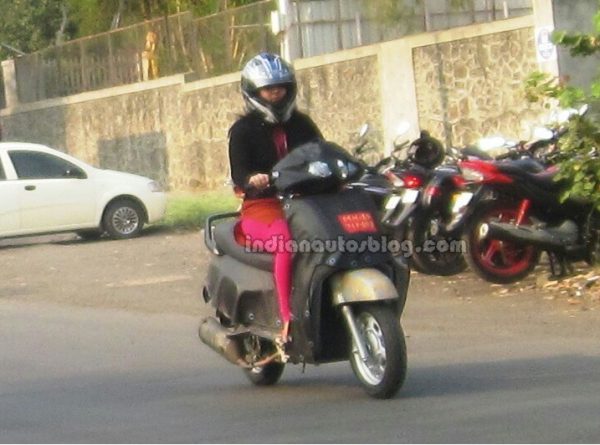 Here are a couple of new spyshots of the scooter published at Indianautosblog.com. While there is nothing really new to talk about, it is the test rider here which is a point of interest. For the first time ever, we see a female test rider testing an upcoming product out in the open.

This is a testimony enough of the fact that Mahindra is carrying out user specific testing of the scooter and is trying to gauge the user behaviour. This may mean that the upcoming scooter is aimed at female customers predominantly.

This mule was spotted somewhere in Pune and appears to be close to be production-ready. Mahindra tried to compete in the scooter market, dominated by Honda’s 110cc scooters, with their trio of 125cc Rodeo, Duro and Flyte, they have done decently well. 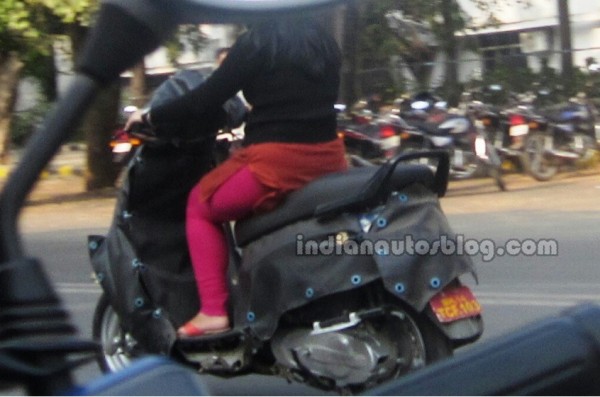 However, it is the current trend that appears to be dipping at an alarming pace and hence we see the introduction of this mass scooter which will announce Mahindra’s entry into the very competitive 110cc segment. It will most probably sport a derivative of the same 106.7cc motor from Centuro.

In these new spyshots, the scooter appears to be of decent size and has telescopic shock absorbers upfront. What appears interesting is the practicality we see here. The handlebars are high-mounted as compared to the seat. This may mean a favourable saddle height with a ‘closer-to-body’ handlebar.

* Our exclusive spotting of Mahindra’s 110cc Scooter in Sep

Another change we notice in this new mule is the more modern grab rail instead of the rounded rod-like one seen on the earlier mules.

Will this new scooter be able to replicate the success of Centuro? This is a question everyone is interested to know. We don’t think it will be too late to understand as this appears to be Auto Expo 2014 bound alongside the majestic 300cc Mojo.