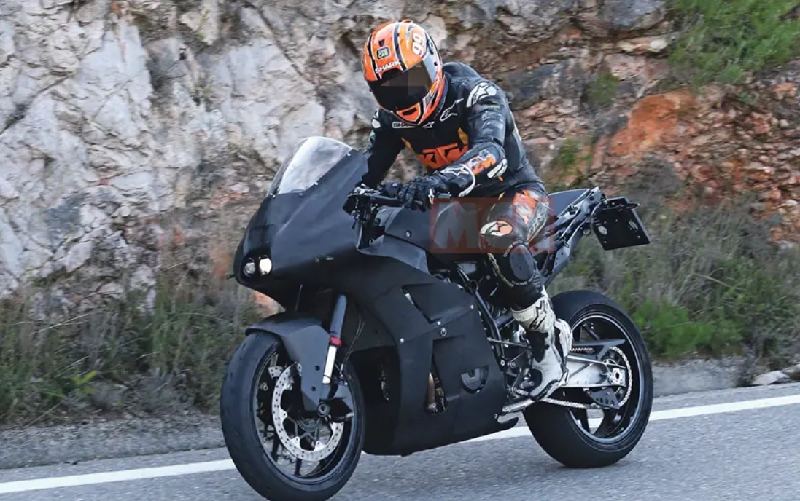 KTM RC990 may be a reality if this latest spotting of a mysterious mule is to go by. The Austrian will return to big supersports after a long time..

Motor Cycle News (MCN) has managed to capture a test mule of what may be the next road-legal Supersport offering by KTM since its V-twin RC8 way back in 2008. The new bike appears to share its styling with the recently launched track-only bike powered by the 890 Duke’s LC8c parallel twin – KTM RC 8C.

However, mechanically it is speculated that it may be powered by the next-generation parallel-twin motor which could be named ‘990’, with a slight capacity increase over the current road version. It is expected that the upcoming ‘RC990’ could boast power figures of around 130bhp – a significant increase over the 119 bhp that the current 890 Duke R churns.

From the front the bike resembles the RC390 and RC200 of the previous generation – bearing twin headlights. Other than the license plate hangar and the LED indicator, the mule visually looks very similar to the race bike – even being fitted with carbon air intakes on the Brembo Stylema front brakes.

A very similar design was also observed earlier in the year on the development mules of the next generation KTM Duke prototypes. The tubular steel frame – a KTM Chassis staple – is again closer in resemblance to the 890 Duke running thick tubes over the engine than to the KTM RC 8C (trellis frame).

This road model prototype also seems to be using a plastic tank with aluminium side plates forming the subframe of the chassis.

This would be the first supersport bigger than the RC390 to join the portfolio after a very long time. However, according to the report KTM is not expected to launch this model before 2024. It appears we still have a few years to wait before we can ride this beast on our roads.