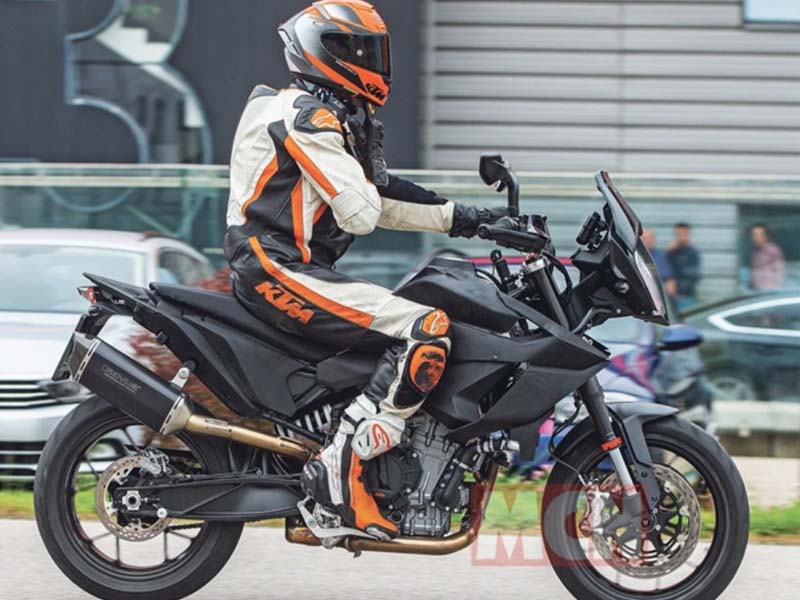 Some spy shots have emerged revealing a bike from KTM which could possibly be the 890 SMT. The design makes the bike look like a middle ground between the streetfighter and the Adventure model.

This motorcycle probably borrows the chassis of the 890 ADV from KTM. We think it’s an SMT because the Austrian maker used to have a 990 which carried the SMT moniker which is an abbreviated form of SuperMoto.

Saddle tanks have been replaced with a singular tank unit with redesigned aesthetics. The weather protection is questionable but replacing the large saddle tanks will sure make the machine lighter.

The 890cc (bound to a 6-speed gearbox) may deliver around 100 bhp of power. This is a speculative figure until the official powertrains stats are released.

The bike gets an upswept exhaust but it’s not clear whether the test mule is fitted with the stock exhaust or it is running on some after-market unit.

It is noticeable that this test KTM is equipped with wheels, tyres, braking unit, and suspension from the Duke.

The spy shot also reveals a TFT instrument panel. Given today’s requirements, it is expected to support Bluetooth connectivity.

Expect features such as cornering ABS, wheelie control, quickshifter, cruise control, and traction control on the model. Nothing can be predicted about the launch but when this does arrive, the rumored 890 SMT may rival the likes of BMW F900 XR and Yamaha Tracer 9.