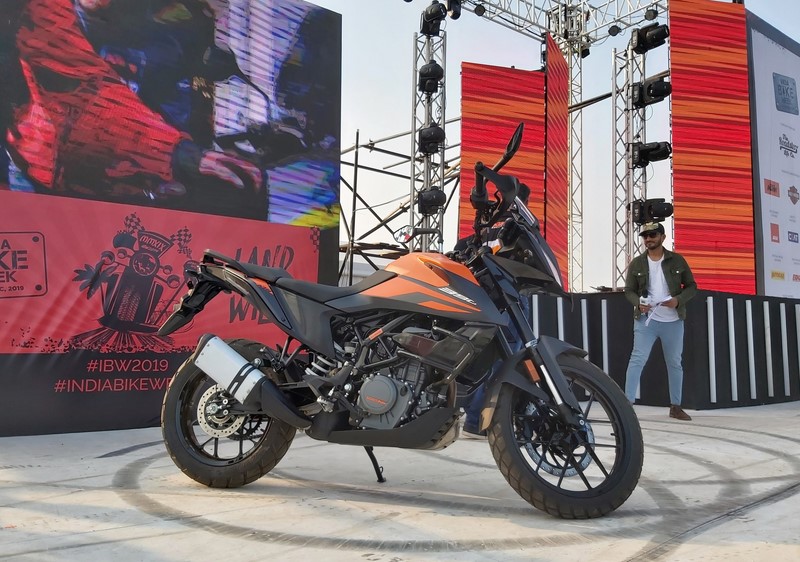 KTM has officially unveiled the much awaited 390 Adventure in India at the ongoing India Bike Week at Vagator, Goa. The motorcycle, draped in orange and black, doesn’t look like a thoroughbred adventure motorcycle but for the moment this is probably the best we will get at an expected priced tag of Rs 3.0 Lakh (yes, expected…..!).

As compared to the international model, which was unveiled at EICMA in November, the India-spec motorcycle does not get adjustable front forks (international 390 gets compression and rebound adjustability) whereas the rear monoshock is adjustable for pre-load and rebound!

The 390 ADV comes with a Bharat Stage VI compliant 373.2 cc engine which is still good for 44 PS of peak power and 37 Nm of max torque – no reduction in this transition! Among ADV traits, it is equipped with 19-17 inch front-rear tyre combination (KTM is using Metzeler Tourance tyres on alloy wheels), higher ground clearance of 200 mm, better suspension travel of 170 mm at the front and 177 mm at the rear (as compared to 142mm and 150 mm of the 390 Duke respectively) and a larger wheelbase of 1430 mm. It is also equipped with a bigger 14.5 liter fuel tank.

Other features include switchable traction control, bi-direction quick shifter, dual channel ABS which are standard on the motorcycle.

As we discussed yesterday, KTM has chosen not to officially reveal the prices at this event which sadly means that this turns out to be an ‘unveil’ of the motorcycle only. To know how much will it cost, we will have to wait for a few more months!