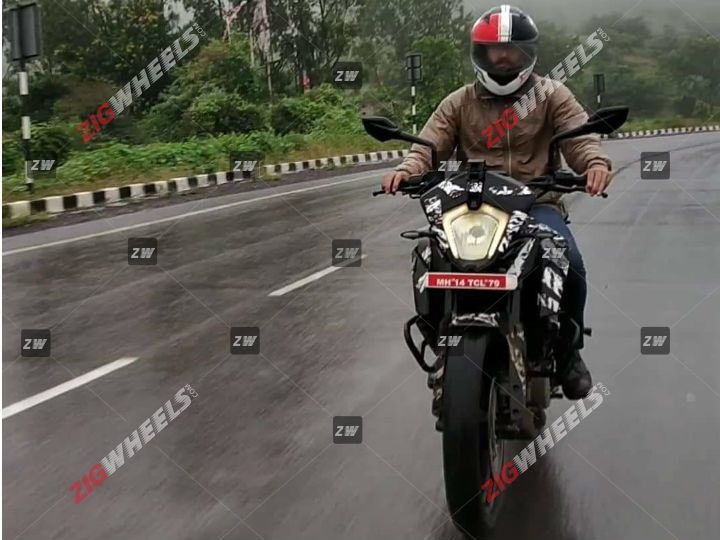 Though it is not conclusive but it looks like there may be two entry level Adventures that KTM is developing. The 390 is a given and it may throw in its smaller sibling – a quarter liter as well.

The ADV(s) are expected to be closer to production and hence at least the exterior body panels should have been frozen by now. And this is what brings about the possibility of the 250 Adventure. Once again KTM has been spotted testing its ADV with halogen headlamp sourced from the Duke 250. The 390 ADV will, in all probability, get LED headlamps, like the 390 Duke (few test mules have been snapped wearing those).

There is an additional, broader head over the headlamp on this one which will house the transparent visor. Rear view mirrors and side blinkers are being carried over from the current lineup. That high front stance is because of those long-travel upside down suspensions. The crash guard on this mule also appears to be broader.

250 Adventure will be equipped with the same 248.8 cc single cylinder engine of the Duke but it will be Bharat Stage VI compliant for sure. In its current tune, it produces 30 PS of peak power and 24 Nm of max torque.

Past spy pics and KTM’s history suggest that there will be many touring oriented accessories that the company will offer as options to provide a more dedicated experience with these relatively small capacity ADVs.

Either one or both of these ADVs will be unveiled at EICMA this year and Indian launch is touted to be on the 6-7th December this year (more details). We expect the 250 ADV to cost under Rs 2.50 Lakh to make a lot of sense in the lineup!