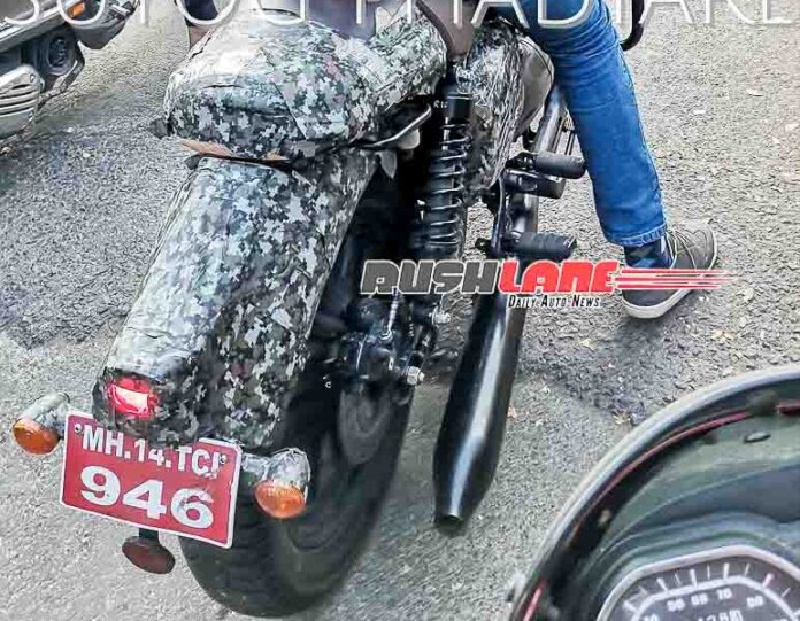 Against the claim, this looks more of a Yezdi cruiser to me – a model that could be based on the existing 300 platform. What do you think…?

Classic Legends, which owns iconic names such as Jawa, BSA and Yezdi, is working on a whole lot of new motorcycles that could be sold under different brands.

Just a few days back, we got a glimpse of a new ADV that directly copies Himalayan’s styling, along with a scrambler-styled roadster. Both these models are likely to be launched under the Yezdi brand. Just before that there were spy pics of what is believed to be the first ever BSA (of the new era).

And today, we have spy pics of another mysterious model that is claimed to be an upcoming Classic Legends’ product. The unclear spyshots reveal the rear profile of what is a cruiser.

They say, with conviction, that this is an upcoming Jawa cruiser, however, this could also be sold as a Yezdi and there is no specific reason why it can’t.

Why is it a Classic Legends Mule?

Because the panels, styling theme, exhaust, etc appear to be similar to the existing models from the company. Aside that, we have probably seen the rider (wearing the same jacket), in an earlier spotting (of the now-in-market Jawa).

Since Jawa already sells its Bobber Perak, which could loosely be termed as a cruiser, this looks more of a possible Yezdi model. We also see that this prototype does NOT come with gas charged canisters at the rear (Jawa and 42 have them).

This could be the rumored third model in Yezdi’s line-up which could, obviously be built on the current 300 platform that already spawns the Jawa and Forty Two. But till we have more details, we can not be sure about the specifics. But this spotting does reveal that Classic Legends is planning a model offensive in the market and this is one of the formats that we will get to see on our roads in the months to come….