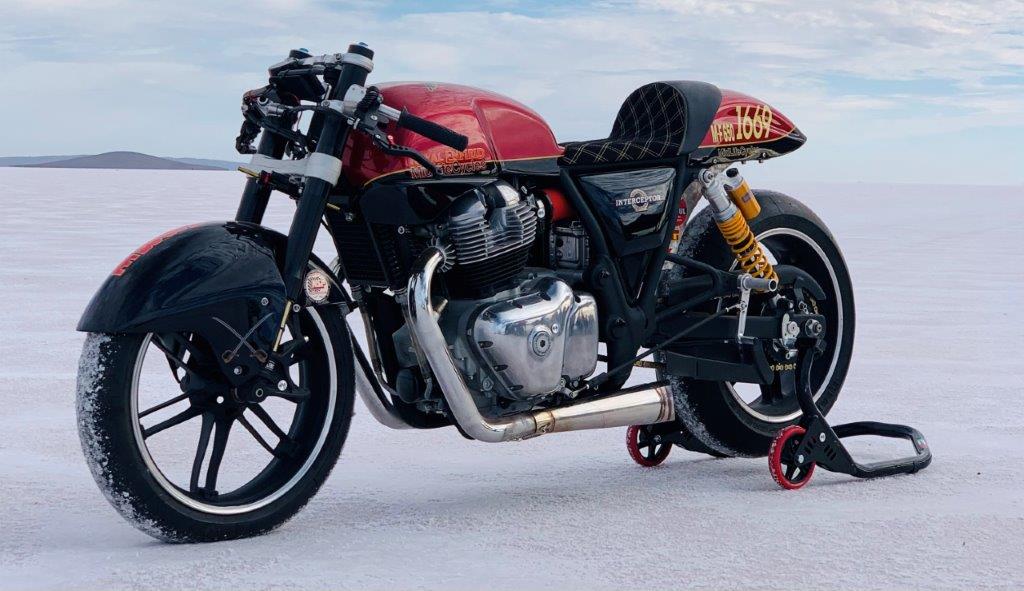 Interceptor 650 top speed record was created at Speed Week run in Australia. Royal Enfield is ecstatic at this achievement by its air cooled engine…

While Royal Enfields are never known for their outright speeds, this is something very special. A racer at an event in Australia has taken the Interceptor 650 to a top speed of whopping 132 miles per hour!

A company Mid Life Cycles modified an Interceptor 650 for an annual Speed Week run at Lake Gairdner, South Australia. The model was running under Class M-F 650 which is for un-streamlined motorcycles that run commercially available unleaded fuel.

Next day of the Speed Week, Charlie took the bike to top speeds of upto 130.370 mph in multiple runs. However, not content with this, he tried several times to, finally, set a new record of whopping 132.050 mph the next day which corresponds to 212.514 km/h. This is a remarkable feat for an air-cooled, single cam 650cc engine and that it remained trouble free during the complete race adds feathers to the achievement.

It must be noted that there were minimal modifications made to the bike that are allowed under this racing class.

Ecstatic by this achievement, Mr Vinod Dasari, CEO of Royal Enfield, said that the 650 twins are the company’s best motorcycles and this is the second time they have established top speed milestones. In 2018, the 650s recorded top speeds of 159 mph at Bonneville Salt Flats.